This Dad's Tattoo Tribute to His Daughter Is Melting Hearts 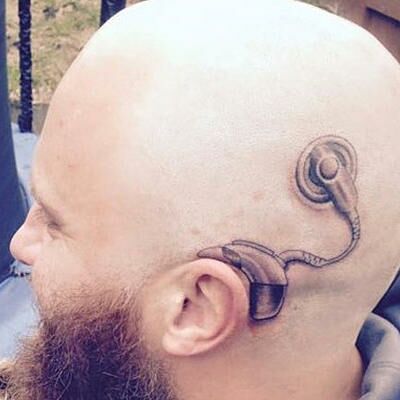 Forget baby’s name and birthdate; this dad’s tattoo is upping the game for meaningful parental ink.

When his six-year-old daughter Charlotte had to get a cochlear implant, New Zealand native Alistair Campbell had an image of the surgically-implanted hearing aid tattooed on his head.

This is the first tattoo for Campbell, who insists it’s not a big deal; his hair will grow back and cover it up (although he’ll shave for “special occasions”). But it’s not the first time a family member’s needed the device. It’s the second for Charlotte, who had her first put in at age four in 2013. Hearing problems run in the family; mom has a cochlear implant too. And big brother Lewis, age eight, wears hearing aids.

Charlotte’s parents have noticed a change in her behavior since getting the implant.

“She wouldn’t talk to anybody [and now she’s] pretty much a social butterfly,” mom Anita Campbell told the New Zealand Herald.

Dad says that his love for Charlotte inspired the tattoo. The same goes for these UK parents, who had their legs tattooed with red blotches to match their toddler’s strawberry birthmarks.

While Charlotte doesn’t completely understand the tattoo’s significance yet, she does think it’s “cool.” We’ll consider that a win.