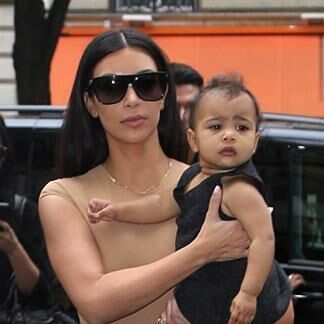 We know that Kim and Kanye make some questionable decisions (ahem…the “Bound 2” music video), but should piercing one-year-old North’s ears be added to the list?

Recently, pictures of baby North wearing what appear to be diamond studs have been floating around social media. No word from Mom or Dad yet. But that hasn’t stopped people from criticizing the couple via Twitter.

As Bumpies have pointed out on our boards, infant ear piercing is sometimes a cultural tradition, occurring as early as 6-8 weeks.

A recurring issue, even more than the concern of infection, seems to the consent of the child.

“If this baby is a girl we’ll wait until she’s old enough to want it. What if she doesn’t want them pierced?” says user Beebcaf.

CoastieWife08 adds, “DD will get her ears pierced when she’s old enough to ask and take care of them, and we’ll make it a mom/daughter day just like I had as a kid.”

If you do decide to pierce baby’s ears, avoid infection by choosing gold, sterling silver, or stainless steel studs, and make sure to monitor the ear lobes closely for redness or discharge.

“I can imagine less of a chance of infection with an infant since they are not messing with the earrings like a squirmy five- or six-year-old would,” says Erin033.

More than anything, it’s a matter of personal preference.

Would you pierce your baby’s ears?