A bedroom TV could lead to some major developmental problems down the line.
Save article
ByStephanie Grassullo
Associate Editor
PublishedMar 2019 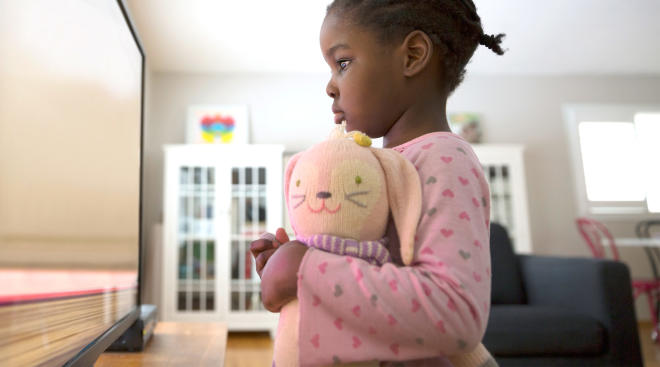 Preschoolers who spend an excessive amount of time watching TV in their room can harm key developmental areas, a new study finds. Specifically, it could lead to an unhealthy weight, poor eating habits and socio-emotional difficulties as a teen.

“The early years are a critical period in a child’s development,” study author Linda Pagani says. “It’s clear that the many hours they spend in front of the screen is having an effect on their growth and development, especially if the TV is in a private place like the bedroom.”

Pagani and her team analyzed more than 1,800 kids from Quebec born between 1997 and 1998 who had TVs in their bedroom when they were 4 years old.

Once the kids turned 13, their health was analyzed for things like body mass index and their diet. Teachers rated how much emotional stress the children faced and how they got along with other students. Teens also completed a version of the Children’s Depression Inventory.

“The children in our study were born at a time when television was the only screen in the bedroom," Pagani notes. “Today, given the portability of digital devices and the constant switching from one device to another, the guidelines from the American Academy of Pediatrics clearly have reason to encourage screen-free zones and screen-free locations at home.”

We live in a digital world where it’s tough to unplug during the day. But no matter how high-tech and fancy some gadgets are, there’s nothing like a classic toy. Something as simple as a cardboard box can do wonders for your little one’s development.