A picture is worth a thousand words.
ByStephanie Grassullo
Associate Editor
PublishedMay 2019 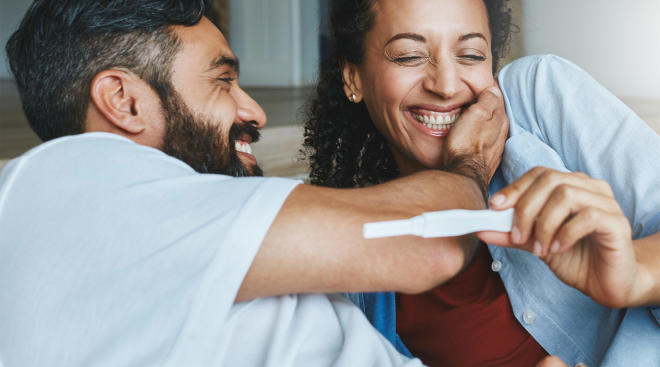 Adding a few subtle cues to prenatal care offices and waiting rooms encourage fathers to be more involved in the pregnancy, a study from Rutgers University finds.

The pictures, brochures and magazines in most ob-gyn offices tend to focus predominantly on mothers. The study’s researchers found a balance of father- and mother-focused images may help men feel confident in their role. It not only benefits the dads-to-be, but it creates a more positive experience for women and newborns as well.

“Research suggests that father involvement during pregnancy causes psychological and physical health benefits for mothers and children, yet fathers often don’t get involved during that crucial period. Current norms in society hold men to lower expectations to be involved and many men say they are not sure what their role should be during this time, leading to often low involvement,” says Analia Albuja, lead researcher and a graduate student of social psychology at Rutgers.

The researchers created two prenatal care waiting rooms. One included only pictures of women and infants as décor and information and magazines aimed toward women. The other included these as well as pictures of men and infants, and information and magazines aimed toward men. The men in the studies viewed or visited one of these two offices with their pregnant partners.

They found men who visited the more father-friendly office reported feeling that the doctors had a high expectation of fathers’ involvement in prenatal care, compared to the men who visited the strictly mother-oriented office. The researchers say this shift in the men’s perceptions of what the doctors believed about a father’s role was key to shifting the men’s confidence about parenting and willingness to learn about pregnancy and healthy habits.

Women go through so many changes during pregnancy, but if you’re doing it with a male partner by your side, remember that it isn’t just about you. Here are a few ways to make a dad-to-be feel a part of the pregnancy process and get involved every step of the way.