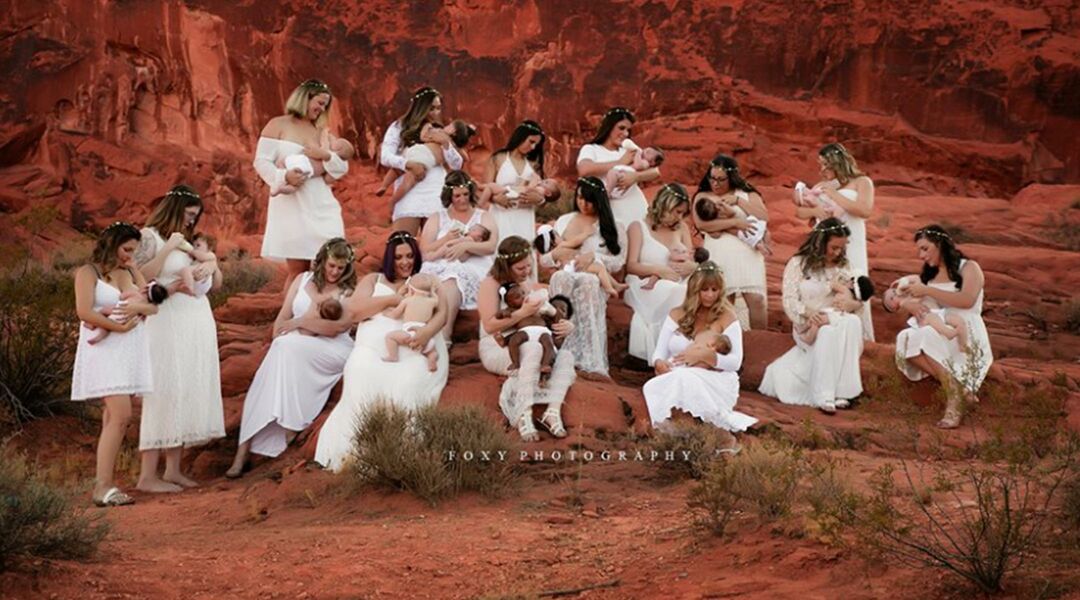 For the second year in a row, a group of strangers posed with their babies to prove an important point: any way you feed your baby is beautiful.

The project, called Fed is Best, is the brainchild of Las Vegas photographer Abbie Fox. It features women breast and bottlefeeding. And it’s something that hits close to home. After Fox had her first baby, she struggled to make it through six torturous weeks of breastfeeding. She sought help from lactation consultants, but after countless failed attempts to get her baby to latch, her husband encouraged her to switch to formula. Deep down she knew formula was the only realistic option for her, she still felt a sense of shame that she couldn’t breastfeed. So she lied.

“Friends would ask me if I was nursing or bottle feeding, and I was embarrassed I couldn’t do one of the basic things a mom was supposed to be able to do,” Fox tells The Bump. “So I’d lie and say nursing. I would ALWAYS get the response, ‘Good; breast is best.’”

When her second child was born in 2012, Fox was able to nurse right away.

“I cried happy tears,” Fox says. “It was very rewarding, and I wouldn’t have changed it for the world. But at three and a half months, I woke up and my milk had dried up overnight. My doctor put me on supplements that helped for a couple weeks, but the milk was gone.”

When Fox told her friends what happened, the judgmental comments resurfaced.

“My friends would say things like, ‘You must have not been taking care of yourself.’ That’s when I really stopped caring what anyone thought. I was so tired of other moms judging me for every little thing—especially for trying to keep my children alive in the best way I knew how.”

Unfortunately, Fox’s experience isn’t unique. While the AAP recommends exclusive breastfeeding through baby’s first six months, only 52 percent of Americans babies even hit that mark—and some of them are simultaneously supplementing with formula. And that’s partly because some women—like Fox—physically can’t produce the milk to make it happen.

Fox had an idea: Why not bring some of these women together?

“Last year, I started seeing other photographers across the country posting beautiful images of groups of women in flowy gowns nursing their babies,” she says. Fox, who is a newborn and family photographer by trade, began wondering “why these photos couldn’t feature bottles and breastfeeding?”

After Fox put out feelers on Facebook, 21 women signed up to participate. The first edition of Fed Is Best was born.

“My goal for this shoot was just to bring awareness to the fact that we need to support one another no matter what, as long as what we are doing is best for our children,” Fox says. “The mom shaming really needs to stop.”

These Bottles Can Track How Much Baby's Eating in Real Time

Q&A: Should I Purchase Bottles?

Q&A: How Can I Transition My Baby From Bottle to Cup?