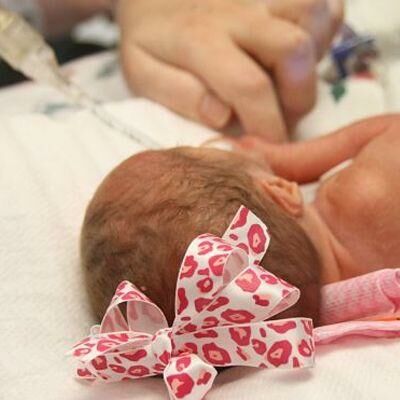 Here’s your Friday-feel-good: Premature quintuplets delivered in North Texas are doing “remarkably well,” according to their doctor.

Born at 29 weeks on Tuesday, the four girls and one boy delivered by proud mama Michelle Seals were breathing on their own after birth. At their doctor’s request, Dr. Vijay Nama, the director at the Baylor University Medical Center at Dallas, four of the babies have returned to machines to help with their breathing, but they’re all expected to be off soon. Nama said, “Overall, they’ve done remarkably well. They’re premature and they’re quintuplets, but they’ve done pretty good.”

The adorable babies, named Mia, Tessa, Gracie, Rayleigh and Brant, weighed in at 2 pounds 10 ounces, 2 pounds, 14 ounces, 2 pounds, 7 ounces, 2 pounds, 8 ounces and 3 pounds, 6 ounces, respectively. Their mama found out she was pregnant with quints after suffering a history of miscarriages. Shortly after she was put on fertility medication, Michelle and her husband, Steven, found out that they were expecting multiples — but not sure just how many that meant.

“I was thinking multiples meant twins,” she told FoxNews.com. "At the beginning we’d go back every week and they’d find a few more. We were shocked.”

Michelle, who’s a first-grade teacher and also a mama to a two-year-old boy, dealt with an angry bout of morning sickness throughout her first trimester and up until she was at least 14 weeks along. She made it at work until about Christmas before leaving to go on bed rest. At the end of January, she was admitted to Baylor hospital — and was proud.  “I’m happy that we got as far as we did,” the doting six-time daddy said.

Even though the babies will stay in the hospital for six to seven weeks, Michelle is looking forward to the day she can bring them home, even if that does mean they’ll have to call in extra hands. For now though, she just wants to hold her sweet little babes. “They are so precious,” she said, "They are tiny and I just love it. I thought I’d be scared because of all the machines and tubes, but I just love it. I want to hold them so bad.”

But don’t expect the outnumbered parents to try for any more children. Michelle said, “Half a dozen is plenty for us.”

At least they’ll never be bored!