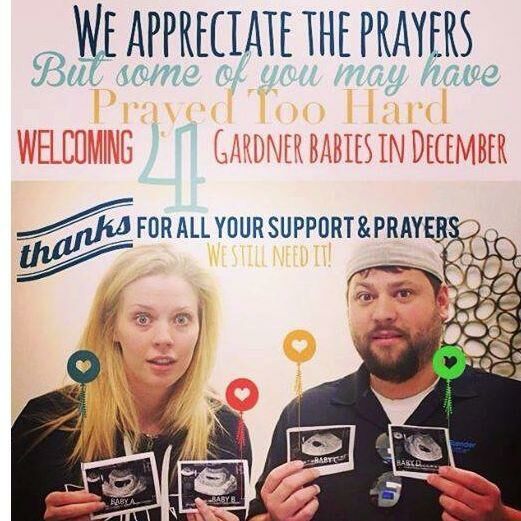 The Gardner Quad Squad is on the upswing after two sudden surgeries Wednesday.

Ashley and Tyson Gardner, the parents-to-be of two sets of identical twin girls, found out Monday that one pair was suffering from twin-to-twin transfusion syndrome (TTTS). What that means: there is an unbalanced blood flow between fetuses who share the same placenta. The Utah natives flew to California following the news for a meeting with Dr. Raman H. Chmait, director of Los Angeles Fetal Therapy at the CHLA-USC Institute for Maternal-Fetal Health.

Although Ashley is due in March, multiples are typically delivered early and she’s been advised to stay on bed rest.

“Tyson and Ashley have made it back safely to Utah! She is on strict bedrest for the remainder of her pregnancy,” a Facebook status read. “The doctor’s goal is for her to make it to 28 weeks, but we think our little fighters will stay in longer! Thank you for your kind messages over the past week; it helped them more than you will ever know!”

The couple’s Facebook page has continuously provided updates on the condition of mom and babies — and massive support and encouragement for the couple. Based on the thousands of likes and testimonials from parents of multiples, those kind messages won’t be stopping anytime soon.

To get involved and donate to the couple, visit their Facebook page.