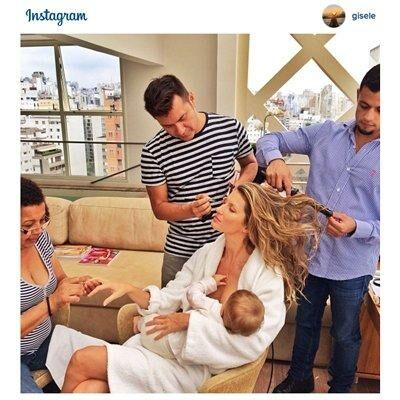 Make way for some midweek controversy, y'all. Supermodel mama Gisele Bundchen has made heads turn once again — but this time, not her strut. The model mom snapped an Instagram of herself getting glam while breastfeeding her baby girl, Vivian , and like you can imagine, all Internet-hell broke loose.

She posted the photo with the caption: "What would I do without this beauty squad after the 15 hours flying and only 3 hours of sleep #multitasking#gettingready." And it's clear to see just how relaxed and natural the mama-of-two looks in the hands of her Glam Squad. Unsurprisingly, it's Gisele's public display of breastfeeding that's receiving mixed reviews. One mom said that she feels breastfeeding is a "very personal choice" and that the photo is "obnoxious" and "a little outrageous," while others came forward saying that Gisele's choice to post the picture is a "a great example of working girl and mother." Another gave her props by saying, "Thank you for normalizing breastfeeding."

The feedback continued, with moms speaking up in support of Gisele's photo. Here's what a few other women quipped on the picture:

"While it is an ideal image, I had an incredibly hard time breastfeeding both of my children. What I would give for an experience like this picture... Not the extra help, just the baby easily nursing in the midst of everything. I hope you know how lucky you are @giseleofficial. Maybe sometime you can share your experiences if they were ever difficult to give hope to those who have had a more difficult time. Breastfeeding isn't just a choice, it's a process."

"I am so happy to see such a major icon not only breastfeeding her baby, but doing so beyond a year! You go, Gisele! There's no reason for anyone to say anything negative, especially other women. This is how God intended children to be fed and if you think there is something wrong with that I think you need to reevaluate your morals." (Baby girl Viv turned one on December 5th.)

We're with Gisele on this one. Good for you, mama!

What do you think? Was Gisele's photo too much — or just right?