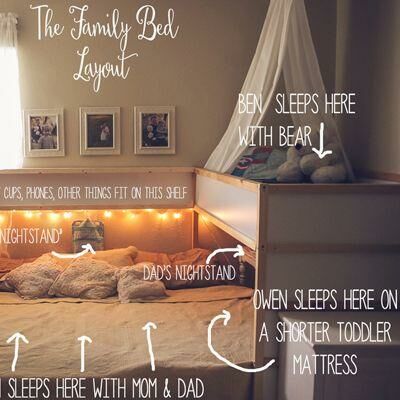 Photo: Elizabeth Boyce via Wandering The World Below

Fitting seven people into one sleeping configuration is a serious feat. And as one mom found, it also draws serious criticism.

Elizabeth Boyce, 35, of Plano, Texas, posted a photo of the bed on her blog Wandering The World Below about a month ago. Made from two IKEA Kura beds (not the first Kura hack we’ve seen!), it accommodates herself, her husband Tom and their five kids. There’s even a special shelf for things like sippy cups and phones.

After her initial photo about the bed started gaining attention, Boyce wrote a post answering some important questions. No, she and Tom do not have sex with their kiddos in the bed — they have two other empty rooms now. Yes, sick family members are kicked out of the bed. And this all came about because the family, frequent travelers, is used to close quarters anyway, and it makes caring for everybody easier.

“We just needed sleep,” she writes. “Tom is disabled and is often sick or needs care at night. I was up helping him, nursing a baby, putting kids back into their own beds, soothing a toddler woken by other kids… it was a mess!  When we moved everyone together, the toddler got a dark little cave to sleep in.  Our anxious, insomniac 11 year old had a dark little cave to sleep in.  Our wild sleepers each had their own space and I was still by Tom to help him if he needed it. Sleep, people. It is really simple.”

Still, negative backlash has ensued. In a recent YouTube video, Boyce emotionally explains that people who disapprove of the sleeping arrangement have accused her of abusing her kids.

“I feel like there’s a lot of judgment, and hate, and honestly I really thought that people were nicer than they are,” she says through tears. “We’re being told that because our children do not have their own rooms, we’re abusing them. I don’t understand how we are so closed-minded and ignorant… of how most of our world lives. It is so entitled for anyone to say that because you don’t have a room of your own, you’re being abused.”

She has a point. The concept of the family bed, or a shared sleeping arrangement, is not uncommon worldwide. Tine Thevenin, author of The Family Bed - An Age-Old Concept in Child Rearing, cites anthropological studies that found in 48 out of 56 societies surveyed, babies slept with their mothers for at least their first year. It’s a necessity in many countries where both space and resources are limited. Proponents praise not only the practicality of being close to children to care for them, but the fact that it fosters familial bonding.

Still, there are obvious risks; the AAP warns against co-sleeping, citing risks of SIDS for babies. Some physicians think it cultivates a sense of dependency in older children.

As far as Boyce is concerned? It’s just sleep. “Sleeping arrangements are an ever-evolving thing,” she writes on her blog. “I am sure we will reconfigure when it stops working. I am the queen of flexible.”