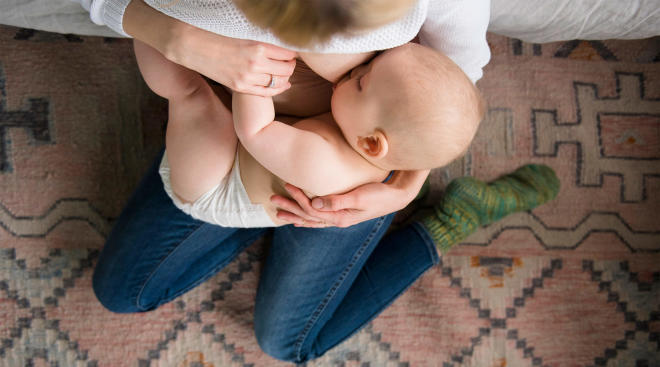 Any new mama knows that not producing enough breast milk is incredibly frustrating—not only can it lead to bouts of “mom guilt,” but it’s also often something that’s out of your control. Using carefully screened donated breast milk can be a solution for some, but it turns out, despite warnings from the American Academy of Pediatrics, a lot of moms aren’t taking steps to make sure the shared breast milk isn’t contaminated, a new study has found.

The research is based on an anonymous survey that was posted to Facebook. Of the 650 moms who responded to the survey, over 50 percent said they weren’t concerned about the safety of informally donated breast milk, and almost 80 percent said they didn’t medically screen their donors because they were often people they trusted.

And that can prove dangerous. According to the AAP, informally sharing breast milk increases the risk of spreading disease or exposure to medication, illegal drugs, alcohol or other contaminants to baby. Also, if you’re buying the milk from an online source, it may be “topped off” with other things. The official AAP recommendation for moms who don’t produce enough breast milk to exclusively nurse baby for the first six months of life is to supplement baby’s diet with formula or with donor breast milk through formal milk banks, which have a rigorous screening process in place.

“Not only are our patients unaware of the potential risks that they are undertaking when participating in these informal milk sharing practices, they are also often not informing their physicians,” Ruth Milanaik, D.O. at Cohen Children’s Medical Center/Northwell Health in New York, said in the statement. "In addition to educating patients, physicians must underscore the importance of discussing these habits with medical professionals so that we have the necessary information to make accurate diagnoses should a medical need arise.”

The new research was presented this past weekend at the AAP’s 2019 National Conference and Exhibition, along with the research abstract Where to get Donor Breast Milk? Self-Reported Parental Motivations and Concerns Regarding the Choice of Informal Milk Sharing versus Milk Banks. The abstract, which was conducted by the same author, found that most online parenting blog posts talk about milk-sharing—with a focus on informal milk-sharing—without addressing the safety concerns.

“Informal milk sharing is becoming increasingly popular and widespread,” Nikita Sood, a researcher at Cohen Children’s Medical Center/Northwell Health in New York, said in the statement. “It is therefore crucial that physicians become aware of this practice and the associated risks so that they can educate patients and address this growing concern.”

If you’re a frustrated mom looking for a supplemental source for baby’s diet, talk to your health care provider for tips.