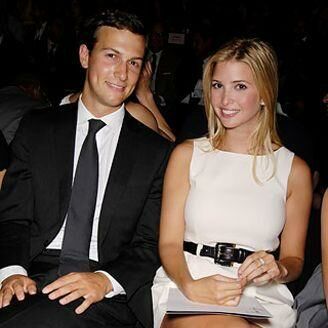 On a break from the boardroom, “Celebrity Apprentice” star — and mommy mogul — Ivanka Trump took to Twitter yesterday to announce the arrival of her second child with husband Jared Kushner, the owner of the New York Observer. The pair already have a daughter, Arabella, 2.

“We just welcomed a beautiful & healthy son into the world,” Ivanka tweeted late Monday night. “Jared, Arabella and I couldn’t be happier!”

The proud parents knew the sex of their second, but decided not share the news with us until after his arrival — and we don’t blame 'em. “I don’t like to tell people, but I don’t have the discipline to keep it a  surprise,” Trump told Fit Pregnancy magazine earlier this year. “There are so many variables in motherhood that, those I can control, I  like to.”

One person who’s no doubt thrilled about the newest Trump’s arrival? His big sister. “She’s really excited and borderline impatient at this point because I started talking about it around six to seven months and she hasn’t waited that long for anything in her life,” Trump told Peoplein September. “So she asks me now, every morning, [if the baby’s coming]. I think she’s starting to mistrust me in the sense that her sibling is actually going to be arriving.”

The ever-stylish and majorly multi-tasking mama — who runs her own lines of casualwear, shoes, fragrances, fine jewelry and more, in addition to serving as a judge on her dad’s reality hit — confessed earlier this year that dressing her bump proved to be a challenge. “You spend the better part of your youth  experimenting and trying to find a style that fits your body type, and all that  gets thrown out the window,” she told The Wall Street Journal. “Your style has to evolve at around five  months.”

She said that the current selection of maternity options aren’t really cutting it for modern moms. “Maternity wear really makes you look much  more pregnant than non-maternity wear,” she explained, sharing her secret to maintaining that sleek, business-savvy style. “The blazer is key — a great blazer in white or black does a  great job in terms of creating a better silhouette than a boxy  dress.”

If we’re lucky, maybe Trump will get busy creating her own line of bump-ready business-ware once she’s back to work. No rush, though, Ivanka! Enjoy your little boy!