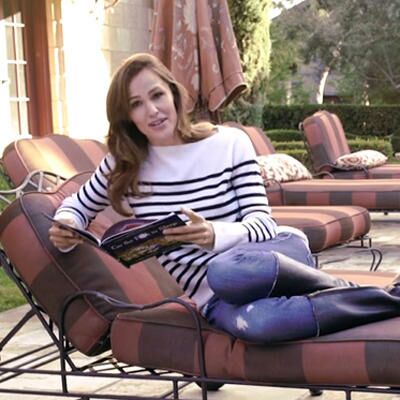 There’s something captivating about hearing someone as poised and proper as actress Jennifer Garner saying the f-word six times in less than two minutes. But that’s exactly what the mom of three does in a new Vanity Fair video released yesterday, all while lounging poolside.

No, Garner certainly wasn’t having some sort of A-lister meltdown as a result of her candid Vanity Fair cover story, published online this weekend. She was reading the parent-favorite picture book, Go The F—k to Sleep by Adam Mansbach, which received a long-anticipated sequel, You Have to F—king Eat, last year.

With a tone reserved specifically for bedtime stories, Garner recites the rhymes of the not-so-kid-friendly book, such as, “How come you can do all this other great sh-t, but you can’t lie the f-ck down, and sleep?”

As we learned from the interview, Garner has a trick of her own for getting more sleep, which she adopted after her split from Ben Affleck.

“When I can’t sleep–and I am not someone who typically has that problem, but I really have in the last year—and I need something to switch my brain off, it has been Tina Fey and Amy Poehler,” she said. “God bless those girls.”

The solution here is pretty obvious: Tina and Amy need to write their own children’s book, helping parents and kids everywhere zone out, relax, and eventually, go the f—k to sleep. When can we pre-order?