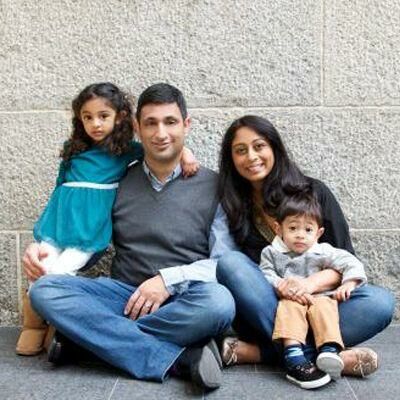 "I can turn this plane around."

That's what a JetBlue flight attendant reportedly told a passenger as she tried to prepare her 2-year-old son for takeoff.

And then the flight attendant followed through.

The Doshi family was flying from Boston to Baltimore on their way back from vacation. On the trip out, a flight attendant had permitted Mona, the mom, to hold her son Milin on her lap.

“We did buy him a seat,” Mona tells Yahoo Parenting, since JetBlue requires children over age 2 to have their own tickets. "But he was squirmy, so I held him for takeoff and didn't know there was anything wrong with that."

There didn't appear to be anything wrong with that, until the return flight. Same scenario — a ticket had been purchased for Milin, but Mona held the fidgety toddler in her lap to prepare for takeoff. This time, a flight attendant reportedly told Mona that Milin needed to be in his own seat.

“We were fine with that, but I did ask some questions since our instructions were different on our first flight,” Mona says. “She said, ‘These are the rules. I’ve been flying for nine years and I do know what I’m talking about.’ She got very defensive very quickly, but when she said that I got him in his seat and was buckling him in.”

Mona says that's when a second flight attendant came over with the same instructions. “I was a bit irritated and I said, ‘OK, I got it. I got the lecture and I’m putting him in his seat.’ She said, ‘First of all, it wasn’t a lecture, and I can turn this plane around.’ I explained that I got the message, and I was focusing on settling my son down, who was now in his seat, but crying.’”

That's when dad Prashant noticed the plane was heading back towards the gate.

“The pilot got on the loudspeaker and said, ‘We are going back to the gate because we have some noncompliant passengers,’” Mona says. The family, including Milin's 3-year-old sister Riya, was ordered off the plane by the captain.

For now, we really only have one side of the story. JetBlue has only issued this statement to WUSA9: "We want our customers to have a safe and comfortable experience on board. Safety is always our top priority, and if our crew feels there is a situation where a customer is unable to follow safety procedures, those customers may need to be accommodated on a future flight."

Parents have had their slew of issues with airlines recently. In April , Alyssa Milano went on a heated Twitter rant after Heathrow airport confiscated her pumped breast milk. In May, singer Sarah Blackwood was kicked off a United Airlines flight when her 23-month-old — who was seated in her lap — wouldn't stop crying and squirming before takeoff.

“It felt like it was in slow motion. I was in tears, it was so embarrassing,” Blackwood told CTV News. “No mother should have to apologize because their child is crying or upset on a flight.”

“I think [the crew members] were annoyed because they thought I was rude, but I never raised my voice," Mona says. "And there are plenty of people on planes who don’t comply with instructions right away — they don’t turn off their phones or they get up when the ‘Fasten Seatbelt’ light is on — and they don’t get kicked off the plane. I thought it was a completely unreasonable action to take. Maybe they didn’t like that Milin was crying, but he wasn’t dangerous, he wasn’t throwing things or running through the aisle.”