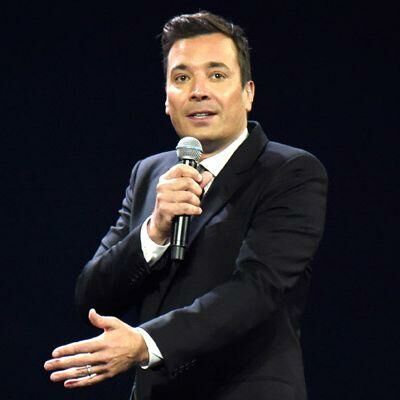 “I promised myself I wouldn’t be that guy when I had a baby, like ‘Oh, you want to see a picture of my babies?’ My whole iPhone is just all baby pictures. It used to be, I guess, food? I don’t know what else you take with your iPhone — it’s brunch or babies,” he tells NPR’s Morning Edition.

“It was a tough time and … it’s not easy,” he says of their time spent trying to get pregnant. “We didn’t know, you know, which one of us wasn’t clicking. I slept upside down at one point — I was like dangling from the ceiling. You know, like you drink teas. And my wife, gosh, she just put up with a lot of stuff. Luckily, [we] got involved with a surrogate and so she had our babies. … She’s a blessing; it was the best thing that ever happened to us.”

The second best thing that could happen to Fallon? Getting Frances’ first word to be “dada.”

This agenda has led him to publish a children’s book, Your Baby’s First Word Will Be Dada, highlighting the struggles of animal dads trying to get their babies to address them.

“The thing about this book is there’s no real point to it. … It’s a selfish thing,” Fallon says.

The book, out today, is available on Amazon.