Dad and Baby Break Guinness World Record for Half Marathon 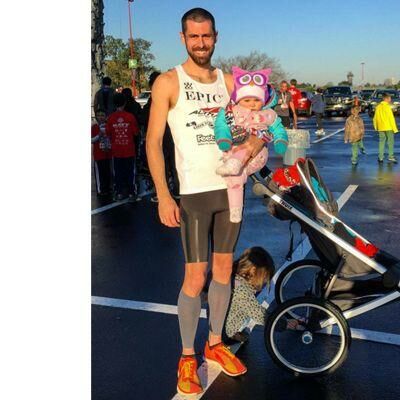 The first finisher in the Katy, Texas, half marathon last weekend? An 11-month-old girl named Holland. Dad Calum Neff, followed right behind, pushing her to victory in a jogging stroller. And with a time of 1:11:27—averaging out to 5:27 per mile—he broke the Guinness world record for a stroller half marathon in the process.

Neff, a 31-year-old Houston resident and Canada native, is no stranger to competitive running. He’s represented Canada twice at the World Mountain Running Championships and plans to race the Los Angeles marathon this weekend. He’s also no stranger to stroller running, previously cruising to 5K victory with his older daughter, Alessandra, now 3.

Wondering how you keep an infant comfortable and entertained for a 13.1 miles worth of running? They key is to get it over with quickly.

"She was happy for probably 99 percent of the way—she was clapping, babbling away, and raising her arms—but around mile 10 to 12, she was a little fussy,” Neff, who used a GoPro to document the race on Periscope, tells Runner’s World. “We had her wrapped up really well, just to keep warm, so she was probably just wanting to get out. Had she started getting fussy early on, the record would have been off, that’s no question. The first importance was just her being comfortable and safe. When you hear that cry, everything goes out the window.”

Neff says he typically trains and races without a stroller, but is happy to take the girls out for a run to give his wife some quiet time. His jogging stroller of choice? For this race, he used the Thule Glide. Sound familiar? That streamlined, fixed-wheel, lightweight stroller won our 2016 Best of Baby Awards for Best Jogging Stroller.

Great pick, Calum! We’ll go out on a limb here: this new world record was brought to you by The Bump.