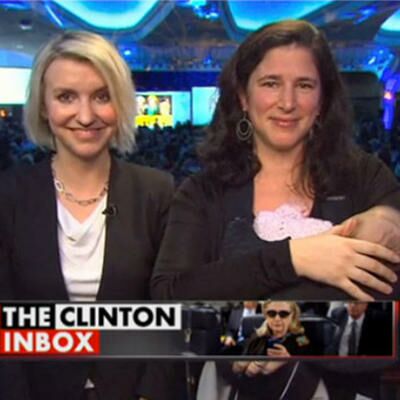 Last-minute live interviews and commentary from experts are the stuff of TV news. And Rebecca Traister's March 3 interview on MSNBC was nothing out of the ordinary — except for the fact her sleeping baby was on camera for five-minute interview too.

Traister, senior editor at The New Republic, was officially on maternity leave. But she didn't want to miss an event commemorating the 30th anniversary of Emily's List , a political action committee that supports pro-choice Democratic women running for public office. So she took nine-week-old Bella along.

During the event, Traister got a phone call from the producers of "All In with Chris Hayes" asking if she could discuss the Hillary Clinton email story on-air. A camera was already available at the conference, so Traister agreed. But just because she made time in her schedule for an interview doesn't mean Bella did.

Rather than risk waking Bella, who was strapped to mom's chest, Traister asked Hayes if her daughter could appear on-air too.

“It seemed totally natural,” says Hayes, who has an 11-month-old son and a three-year-old daughter. “This is part of….normalizing that kind of thing.”

The whole thing went off without a hitch, and without a cry. And if it hadn't, Traister says she would've done something. “If the baby had been awake or started to cry—if she was interfering with the audio—I would have handed her off,” Traister says. “I wouldn’t have stood there with a crying baby.” She adds that context was a part of what made this appropriate; if she were on Meet the Press, for example, Bella wouldn't have made an appearance. "I was on a show that wasn’t put off by having a guest with a baby strapped to her, at a conference of people who understand the way that parenthood bumps into work life."

On the heels of former Huffington Post and Washington Post manager Katharine Zaleski's apology to working moms, this is another win proving that career and baby don't have to be mutually exclusive.