Kate Middleton and Prince William Leave the Hospital With Royal Baby: All the Details! [UPDATED]

I CAN'T HANDLE THE CUTENESS.

Kate Middleton, Prince William and Baby Cambridge have officially left the building — and they're headed for home! The proud new parents came outside and greeted the press, showing off their handsome little man and answering a few questions from thousands of reporters just waiting to catch a glimpse of the royal baby boy.

Isn't he a dream?

Doting new daddy who looked every ounce as in love and as overwhelmed as any new parent shared that he and Kate are still "working on a name" for their little Prince. As for how his son is fairing, daddy said that his little boy has a "good set of lungs on him." He even vowed to "remind him his tardiness" in years to come, for keeping reporters, news outlets and thousands of well-wishers waiting so long for the royal baby to make his debut!

As for new mom Kate — she looked unbelievable! She came out holding her son, waving and glowing. She said that the whole process was "very emotional" and even added that this time together is a "special time for any family." And the girl is so right. The first few days with baby are filled with shock, awe and so much love. I love that Kate — a mom for just over one full day — totally gets it.

You could even read Kate's lips as the duo was standing on the steps on the Lindo Wing. She asked her husband, "Do you want to hold him?" and Prince William took over and looked so effortlessly comfortable and confident holding on to his new son. He's going to be an amazing daddy — no doubt about it!

After answering questions, they popped back inside the hospital to strap their baby into his car seat before heading off in style, to Kensington Palace. Will strapped him in ON THE FIRST TRY (go daddy! Wonder how many times they practiced that!) and even breathed an adorable sigh of relief. Kate hopped in the back and lovingly looked on as Will drove away. Riding off into the sunset....

Now — to the outfits! Kate came out wearing a beautiful chambray-colored light blue polka-dot silk dress (no details on where to buy yet!) with an empire waist. I love her outfit choice because it's so similar to the outfit Princess Diana wore when she left the hospital giving birth to Prince William, in 1982. I think it's a beautiful nod to Diana, and very much a part of keeping her story alive with the birth of the royal baby!

Check out the similarities: 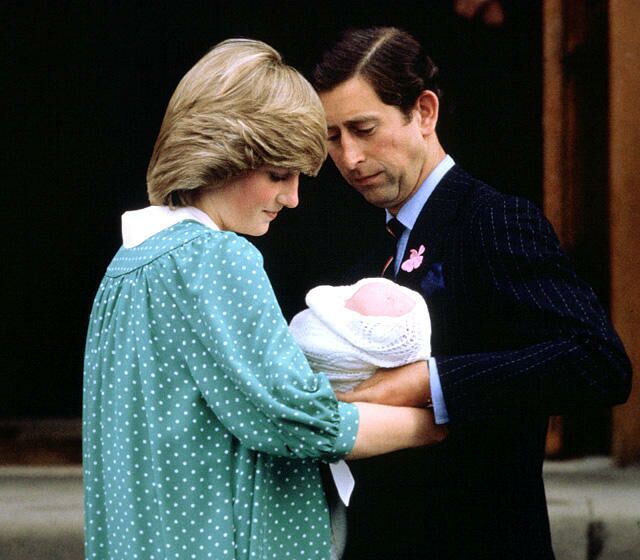 Stay tuned for details on baby's name! We'll have them as soon as it's released!

Did you watch Will and Kate leave the hospital?