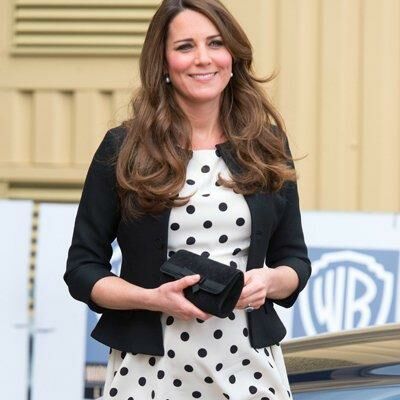 Good news, royal baby fans: The royal baby will be born. We’re just not sure when (or how, or where) he (or she!) will make an official debut.

But while the world waits for the news to break, let’s consider what will happen after His or Her Royal Highness is born. In the first few months postpartum, Prince William and new mum Kate Middleton will enjoy sleepless nights, diaper blowouts, spit ups, first smiles, first steps and first sounds. They’ll laugh, they’ll cry, they’ll wonder what end that stain on their Royal Attire came out of and they’ll feel almost like the rest of us do: overwhelmed and overjoyed by the love, tenderness and adoration they feel for their little one.

1. They Won’t Serve the Public

Don’t expect them to be carpooling kids to futbol practice anytime soon, but royal author Charles Mosely thinks that the first-time parents will change the face of royal parenting for the better. Dating all the way back to when the Queen of England was a new mom, Mosely suspects that Will and Kate’s version of what makes a parent will differently greatly due more to the time period that they’re raising their children in. “Prince William and Kate are naturally domestic in a way that Prince Philip and the queen were not,” he said. “Not because they were neglectful of their domestic duties, but because the queen and Prince Philip came of a generation where your duty was considered much more to the public, that’s a crucial difference there.” So we can expect that Kate and Will will orbit around their children, more so than the queen and Prince Philip, whose lives revolved more around their duty to the public.

Those changes won’t just reflect the difference between parenting in the 40s (when Prince Charles, the eldest of the queen’s children, was born) and in the 21 century — they’ll also parent differently than the way William’s mother, Princess Diana , raised her boys.

When McGrady was a member of the Queen’s staff, he said that she “would hardly ever see Prince Charles” because “he’d always been in the nursery.” That will likely change with the birth of the royal babe. Kate and Will will make it a point to travel with baby, cancel engagements to spend time together at home and they’ll probably keep out of the public eye for the first few weeks of baby’s life. The normalcy they’ll try to instill on baby will set a precedent for the future of the Royals — and baby’s better off that way.

An example of the changing times? McGrady said that once Princess Diana came into the mix — all old timer’s bets were off. “I remember she would fight for time to spend with William,” he told the mag. When Prince William was just 8 months old, his mama broke from tradition and brought her infant with her on a six-week tour of Australia and New Zealand.

If Di paved the way, we’re sure that the Kate will spend just as much time with her child — and then some.

Former Kensington Palace chef Darren McGrady, who was chef to Queen Elizabeth for 11 years and a full-time employee of Princess Diana’s for four years, spoke to Us Weekly about the differences he expects to see between the late Princess Di and Kate. “Kate, I understand, can cook,” McGrady told the mag, “so I think she will do some cooking, but of course once the baby comes along, [she and William will] be expected to start taking on royal engagements again, so any sort of free time they get they’ll want to be spending having quality time with the baby — and not peeling apples and making purees. That will be delegated pretty quickly to the chef.”

McGrady said that Diana — and the queen, too, for that matter — were never cooks. So Kate’s hands-on approach will be a first for the royals, even if it is for a limited amount of time.

3. Both Families Will See Baby

McGrady went on to suspect that Kate’s parents, Michael and Carole Middleton, will spend plenty of time with their new grandchild. While he didn’t make mention of whether or  not this will be a first for the royals, it does sound like the fact that Mike and Carole will balance the time they spend together with Will, Kate and baby in a way that hasn’t been done before. For the first six weeks postpartum, it’s been reported that Kate will stay with her parents while the extensive renovations are completed at their royal apartment.

Time spent outside of the palace life might also help “normalize” the baby. He’ll learn what it’s like to eat off of a Pyrex, as opposed to plates dipped in gold.

4. ** William Will be the First to Take a Paternity Leave**

The AP reported that “William is the first senior royal to receive statutory paternity leave, which was introduced in Britain in 2003. Under British law, William is entitled to two weeks off at a flat pay rate of just under 137 pounds ($206) a week. He’s lucky — the military is among employers that pay more, and he will receive his full salary for the fortnight. The government says two-thirds of new fathers take some paternity leave, but less than half take the full two weeks. Some are ineligible because they are self-employed or haven’t been at a job for at least six months. Others just can’t afford it.”

Totally retro, I know, but did you know that the royal babes are not allowed to sit at the Queen’s table until they can function like an adult? I kid you not. McGrady said that kids are kept from the Royal Table until they can “hold their knife and fork properly and know which order to eat and how to conduct themselves properly.” Talk about pressure!

This, probably, won’t be the case for the royal baby, who’ll eat with his (or her) parents once he’s big enough to fit into a high chair. The old school “no improper mortals at my table” was most likely buried as we headed into the new millennium, but it’s not surprising that it once was a common practice. If Kate’s planning on cooking, don’t you think she’s pretty keen on feed__ing, too?

6. There Will Be Enough Dirty Nappies for Mom and Dad

Shocking? Totally. Apparently, daddies who double as Princes and Kings aren’t expected to wipe their babies’ bums. William, however, won’t get the same treatment. McGrady predicts that William will change lots of “nappies” for his baby girl or boy. Even though his dad, Prince Charles, never laid a hand on a dirty nappy in his life, Will and Kate will split diaper duty. (Thank Heavens!)

Who run the world? Girls! (In England, at least.) Before Kate Middleton, it was only the men in the royal family that had a chance at serving as king. Now, ladies can be queens, too (and not just because of marriage). For the first time in royal history, girls are viewed as equal in succession for the British Throne. When Queen Elizabeth inherited the throne, it was because she was the king’s only child. She had no brothers in line for the throne.

BBC reported that, “The leaders of the 16 Commonwealth countries where the Queen is head of state unanimously approved the changes at a summit in Perth, Australia. It means a first-born daughter of the Duke and Duchess of Cambridge would take precedence over younger brothers.” The changes, Prime Minister David Cameron said, are in large part due to the changing of the times. “The idea that a younger son should become monarch instead of an elder daughter simply because he is a man, or that a future monarch can marry someone of any faith except a Catholic - this way of thinking is at odds with the modern countries that we have become” he said.

According to several reports, Kate and William have apparently said “no” to a nanny for baby. The TODAY show spoke with royal nanny expert Rosemary Albone and she said, “Previously, the royal nannies would have been very much taking on board the royal protocols and expectations from parents, and following those to the T. That meant instilling in children the expectations of how they should behave and the sorts of things that would be appropriate for the children to be demonstrating in public.”

With the idea of a monarchy changing so drastically, Kate and William are intent on keeping a hands-on approach to parenting.

How else do you think William and Kate Middleton will change the royal family?