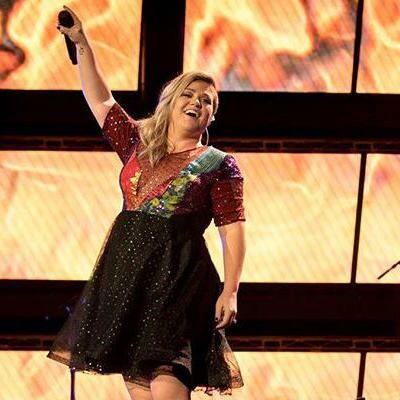 The singer, 33, revealed on Instagram today that she’s expecting a boy.

“In other news, River’s gonna have a little baby brother :) #itsaboy We’re so excited!” she captioned the photo.

Clarkson announced she was pregnant back in August after she teared up while performing her hit “Piece by Piece,” a song she wrote about her relationship with her father. In an unexpected move, she paused before telling the Los Angeles crowd, “I was not planning on announcing this, but I’m totally pregnant.”

Later in the concert, she said she didn’t intend to break the news. “I’d like to apologize to my husband,” she said. “That was not planned. I just didn’t want you to think I was crazy or something. Honestly, I’m just so hormonal today…I haven’t vomited yet. That is a freakin’ win, y’all.”

This will be Clarkson’s second child. She and her husband, Brandon Blackstock, welcomed River Rose in June 2014. Since then, she’s made cameos in Clarkson’s songs and has been spotted on sets at mom’s music video shoots.

Watch the emotional announcement below: