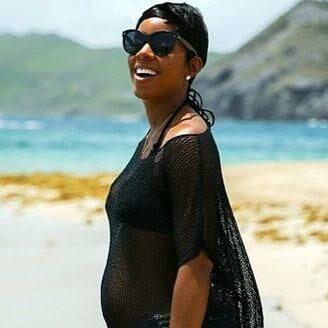 Whoops! Kelly Rowland is just so excited about the impending birth of her first child that she let her baby’s gender slip during an interview with Fox411 yesterday at a Caress event. But can you blame her? Newly married, newly pregnant… I wouldn’t be able to keep anything in either!

“We’re very excited,” Kelly told the news outlet. “So far, everything has been good. I just feel like the baby is already rotten — like literally, my Caress family has gotten him all of his little bathing stuff, his toys — it’s just so cool.”

Immediately realizing what she let slip, she dropped the f-bomb (in the cutest way possible, of course). “It, it’s… aw, f**k it! It’s a boy. It’s a boy!” Kelly said, and then asked her rep to let her husband, Tim Witherspoon , know she “spilled the beans.”

The mama-to-be has everything else under control, though, since the nursery is all planned out.

“I just wanted it to feel like a comfortable museum. Almost loft-y like. It just looks really cool. He’s got these huge pieces of artwork. It’s just really fresh,” she said.

Also, can we just call it right now that Baby Boy Witherspoon will be Blue Ivy’s first boyfriend?

Did you try to keep your baby’s gender a secret?