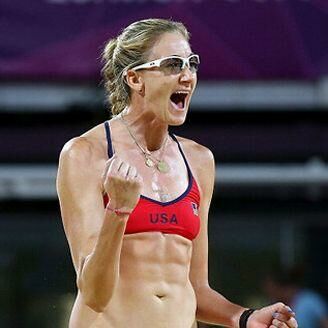 Photo: The Victory Formation / The Bump

While the rest of us stuffed presents down the chimney with care on Christmas Eve and enjoyed time together with family, Olympic superstar Kerri Welsh Jennings announced on the _Today _show that she and husband Casey are expecting a baby girl together! As if three Olympic medals wasn’t enough for the volleyball phenomenon!

Already parents to sons Joseph, 3, and Sundance, 2, the happily married couple decided to continue a Christmas tradition when it came to finding out the gender of their baby-to-be. Their doctor penned the baby’s gender on an ornament, which revealed they would be making way for a baby sister come April! Kerri said, “We’re doing to share something so special today and I’ve been dying for two months to find out.” Once the ornament had been opened, she broken down in tears (of joy!) and said, “Oh my god — we’re having a girl!”

Here’s hoping that baby girl Jennings has her mama’s knack for volleyball — we can’t wait for her Olympic debut!

Congratulations to the entire Jennings family!

Were you pregnant over the holiday season? How did you announce you were expecting?