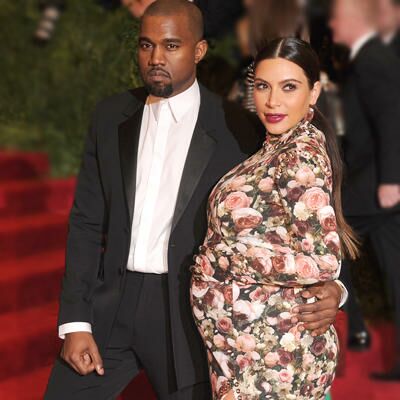 Oh, heavens y’all. If you thought that mama-to-be Kim Kardashian and her boyfriend, Kanye West , were going to keep in line with the Kardashian naming tradition_, you got another thing coming_!

In the past, Kardashian admitted to E! News that she and her boyfriend were still “thinking about” whether or not they’d bestow baby with another “K” name, even saying that she has to discuss that with her “boyfriend to see where we are. But we’ll keep the name private, I think, whenever we decide.” Uh, sorry Kim, but privacy and celebrities aren’t really a “thing”…  ever.

The expectant mom, who comes from a notoriously long line of “K” named siblings, and her beau, West, both have “K” monikers, which makes the pressure to give their baby girl (or boy!) a K-name all the more serious. But Kimye, apparently, has another plan.

Though their little bundle isn’t due until July, the duo has reportedly been toying around with breaking the “K” naming tradition — much like Kardashian’s big sister Kourtney did with her kids, Mason and Penelope. There’s no word on what Kim wants to name baby, but Kanye has already picked a name — and it’s more out there than we ever imagined!

So, what does the rapper plan to name the heiress (or heir!) to his throne? According to The Sun, Yeezy is pretty fond of the name North. As in, " Hey, we’re traveling north!" or, " Do you know what direction the North Star is?" or even better, " Canada is north of here."

And if you haven’t already put two and two together, allow me. The baby’s full name would be: North West. Yup. North… West.

The reason behind West’s name pick is that he “thinks it sounds good with his surname.” And, to be honest, I have to agree. Nothing says I have a good sense of direction like naming your kid North West.

Regardless, Kanye gets points for originality. I don’t think I know of any celebrities — or anybody at all, to be honest — considering that name for their baby-to-be. The pick, too, is very in-tune with West’s eccentric personality, and I think it’s simple enough to be a good fit for baby.

What do you think of their reported name pick?