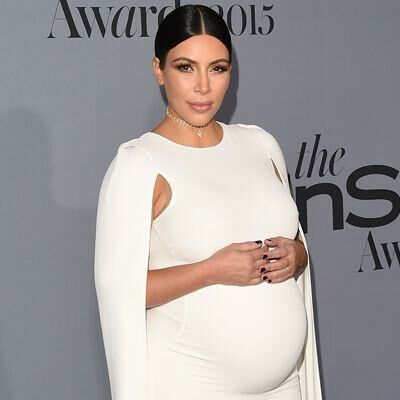 For many women, pregnancy is a positive experience, with nothing but glowing things to say about their body changes, baby kicks and unusual food cravings. Some say it’s easier the second time around, when you know what to expect, while others say it’s harder to be pregnant and chase after a toddler. But for Kim Kardashian West, who is expecting a son in December with husband Kanye West, there have been many bumps in the road, and she isn’t shying away from talking about it.

In a revealing post on her website, 35-year-old Kardashian West opened up about the anxiety and fears she has about delivering her second child and how she’s trying to “be hopeful and not stress out too much” despite a high risk for potential complications.

“With the issues I had last time, my risk of having preeclampsia and placenta accreta are increased and there’s not a whole lot I can do to prevent it, so my anxiety is a little high leading up to my delivery,” she wrote.

In 2013, Kardashian West had to deliver 2-year-old daughter North six weeks before her due date after being diagnosed with early-onset preeclampsia, a rare condition that only happens in 5 to 10 percent of women. The condition, which causes excessive weight gain, high blood pressure, and swelling in your hands, feet and face can affect the placenta, as well as mom’s major organs, like the liver, kidneys and brain.

For Kardashian West, it led to placenta accreta, a serious condition which occurs when the placenta grows too deeply into the uterine wall. Women are unable to normally deliver the placenta after delivering the baby because it’s latched onto the uterus.

In what she described as “the most painful experience of my life,” she had to endure a procedure in which her doctor removed the placenta off her uterus piece-by-piece with his fingers, which, despite receiving a second epidural, was still “disgusting and painful."

Because of the issues she had with her first pregnancy, Kardashian West is at a higher risk for a reoccurrence this time around. And with five weeks until her due date, she has yet to be diagnosed with preeclampsia again, although she has some of the symptoms. Just last week she tweeted that she’s gained 52 pounds during this pregnancy, well above the recommended 25 to 35 pounds by the American College of Obstetricians and Gynecologists.

Despite these odds, Kardashian West knows that because there’s not a lot she can do to prevent it from occurring again, she needs to stay positive and informed about what can happen during labor and delivery. “In a very rare case, I might need a hysterectomy after delivery if my condition is severe enough, but luckily my doctor doesn’t think this will happen.”

She leaves fans with this tip:

"My advice to anyone going through this or anything difficult during pregnancy is that all you can do is be hopeful, get the best information out there and just be prepared,” she wrote. “The more information you have, the better you know how to handle it!”