The essay topic? “How mommy reacts to me.”
Save article
ByNehal Aggarwal
Associate Editor
PublishedApr 2020 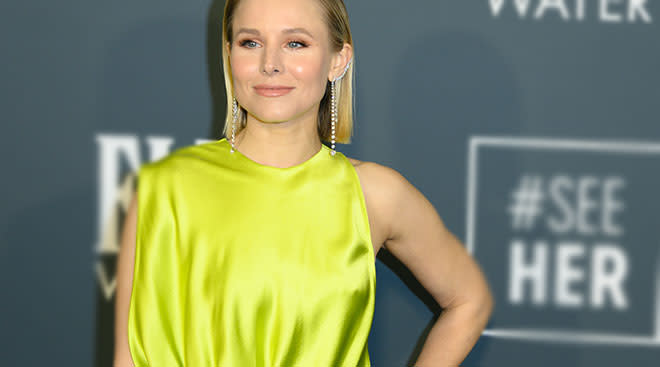 Every parent is just trying to do their best right now. They’re juggling work, house chores, homeschooling—it’s just a lot. Apparently, celebrity parents are no different, and they’re just doing their best to get by, including actress Kristen Bell. She recently shared an essay her daughter wrote for a homeschooling project—and it’s an all too relevant critique on Bell’s parenting.

Bell’s oldest daughter, Lincoln, 7, was assigned her first “opinion essay,” and she choose to write about the topic, “how mommy reacts to me.” In a grid brainstorm for the essay, which Bell shared to her Instagram, she wrote, “bad reactions” (in which “bad” is underlined twice), “no patience,” “doesn’t believe in me,” and “stern voice” in different corners of the grid.

Of course, Bell took the criticism well, and even explained she was impressed with her daughter’s ability to construct her argument and support it with evidence. In the caption, she wrote, “Trying to get my 1st grader to write her first opinion essay, and was quite impressed with the topic she chose as she presented her grid with opinion and evidence. Touche my young lass. Touche. (The bottom says “Stern Voice.”)”

Parents can definitely relate. One person wrote, “Yaassss, mom of a first grader. Lol, thanks for keeping it real. Hugs to you during these challenging times,” while another commented, “Feeling very seen! My 1st grader shares those opinions. It’s been a looooong seven weeks (& counting.)” A third follower shared, “Today my four-year-old looked me dead in the face and told me ‘Mommy you are nothing.’ Quarantine is definitely getting to us all.”

Of course, Bell and husband Dax Shepard are just doing their best to stay sane during these strange times. Last week, Bell posted a photo to her Instagram that read, “being quarantined with a talkative child is like having an insane parrot super glued to your shoulder.” In the caption she clarified that she has not one, but two “insane parrots.”

Earlier this month, Bell revealed, while initially she had tried to keep her family on a strict schedule, it hadn’t gone well. “The biggest lesson I learned in the beginning was I wrote out the color-coded schedule — when our academic time would be and when our art time would be. By day five, I was making everybody miserable,” Bell told Entertainment Tonight in an interview. “The kids hated that I was trying to adhere to the schedule. So about a week ago, I woke them up and I said, ‘This is your most important mission ever. Get up.’ I brought them in the kitchen and I had them rip up the schedule…I had them shred it and they felt so good. I said the learning lesson here is that if you make a plan and it’s not working, you pivot.”