Kristin Cavallari Is Pregnant With Baby No. 3! 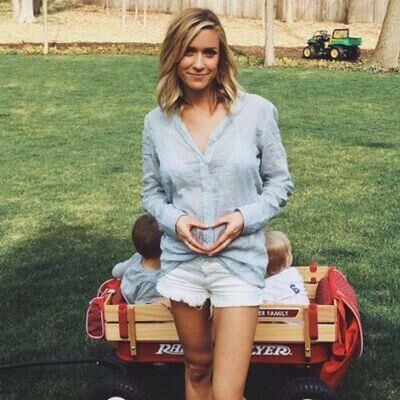 Just a year after she gave birth to her second son, Jaxon Wyatt, Kristin Cavallari, announced she’s expecting baby no. 3.

“We’re at it again! Thrilled to announce baby number 3 is on the way! The Cutler crew just keeps growin’!” the former star of The Hills announced on her lifestyle app,  Kristin Cavallari App, this morning.

The 28-year-old shared a photo of herself making a heart with her hands over her belly, with sons Jaxon, 1, and Camden Jack, 2, sitting behind her in a wagon.

We wonder if Cavallari and husband Jay Cutler will let us in on baby’s gender this time around. While pregnant with Jaxon, she told PEOPLE they found out the gender, but kept it to themselves. “We’re going to find out, but we’re not going to tell anybody, so it will be a surprise for everybody else,” she said. "Of course I want a little girl, but another boy would be a ton of fun too, so I really don’t care either way. There’s great things about both.”

A new baby may mean a new round of probing into her stance on vaccinations. Cavallari opted out of the MMR vaccine for both boys.

“Vaccines are not something I wanted to publicly come out and speak on,” Cavallari told HuffPost Live of her previous interview remarks. “I sort of got bombarded in this interview and thrown off-guard. There’s really scary statistics out there, and to each their own. Autism wasn’t prevalent — like it is now — years ago, so something is going on, whether it’s the chemicals in our food or the vaccines. Something is happening, and we can’t really ignore that. I choose to believe that I think it’s in the vaccines but, again, to each their own and that’s where I stand on it.”