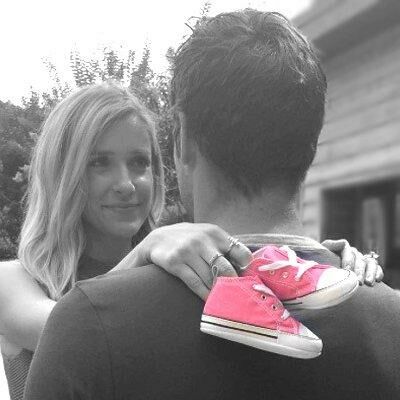 Kristin Cavallari, fashion designer and former star of reality show The Hills , announced the birth of her baby girl this afternoon!

This announcement also answers our biggest question: What is the baby’s name?

In September, Cavallari revealed she would be naming the baby girl after a dog. And a stranger’s dog at that.

“I met a woman and her dog, and I loved her dog’s name. Funny enough, it was the name she had picked out if she had a girl, but she had boys, so she used it for her dog instead,” Cavallari tells Cricket’s Circle. “Here we are 3.5 years later, and we are going to use that name for our little girl!”

Cavallari and her husband, Chicago Bears quarterback Jay Cutler, have the baby-making business down to a science: They already have two sons, 2-year-old Camden Jack and 1-year-old Jaxon. Both sons had a spot in the cute pregnancy announcement photo for baby no. 3, which was first released on the Kristin Cavallari App Kristin Cavallari App.

The Bump previously chatted with Cavallari about her life as a mom, including her biggest baby fears and Cutler’s hands-on approach to fatherhood. (“It’s adorable to watch your husband with your little boy. They’re so cute together!” she gushed.) There’s no doubt that she loves her life as a mom, but this could be it for the Cavallari-Cutler clan; she admitted to Michigan Avenue magazine that “Before we had children, Jay and I both wanted four, and now we’re thinking three, but we’re just going to have to see how it goes.”

Congratulations to the family!