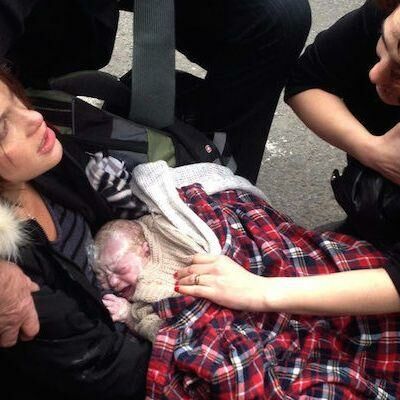 Even if you map out a detailed birth plan, baby may decide to take labor in a different direction.

You’ve likely read about the mom who safely delivered a newborn girl under the bright lights in the Big Apple earlier this week. After experiencing contractions in the middle of the night, Marwa Abdrabo headed to the hospital with her husband and two-year-old son in tow, but it became painfully clear that she wasn’t going to make it there in time. So with the assistance of three police officers, Abdrabo gave birth in the newly-opened World Trade Center transit hub in New York City.

Of course, she isn’t the first mom to give birth in transit: Women have delivered on the street and in planes, trains and automobiles. From winging it on a plane to curbside in a cab, here are some crazy places they’ve given birth:

All hail this mom Sometimes it’s pretty hard to find a cab, as one mom experienced when she gave birth while waiting for one to arrive. When New Yorker Polly McCourt (pictured above) realized she was in labor, she quickly went down to her building’s lobby, where her doorman was ready to help. “I went downstairs to get a taxi and my water broke, right in the front foyer of the building,” she told the New York Daily News_. _ “Anton [the doorman] knew that I was in trouble, so he walked me to the corner of the street to try to get a taxi. And then I went, 'Oh no. She’s going to come out.’" McCourt ended up giving birth on her building’s corner, in front of 40 to 50 onlookers. She ended up giving her a middle name based on one of the women who stopped to help.

Baby onboard Shortly after takeoff, a woman gave birth on a flight from San Francisco to Phoenix. Luckily there was both a doctor and a nurse on the Southwest Airlines flight who assisted the mother through delivery. Fellow passengers had no idea what was happening until the pilot made the surprise announcement and diverted the plane to LAX. “It was amazing,” a flight attendant said. “All the passengers were awesome. Everybody was clapping.” Paramedics arrived at the scene and took mom and baby to the hospital. No word yet on whether or not they’ll take a cue from Kim and Kanye and name the baby South West.

Rush hour delivery We’re pretty sure New York City cab drivers have seen it all, but this surprised even the most seasoned New Yorker. The drama began when Sarah Steinhaus’s water broke in her apartment. Her husband, who wasn’t home, called his brother Michael, a fourth-year medical student, to take her to the hospital in a cab. And it’s a good thing he was there! The cab got stuck in rush hour traffic more than 50 blocks from the hospital. Michael asked the driver to pull over so he could check on her progress and was shocked to see the baby’s head starting to crown. Baby was born just minutes later and paramedics arrived shortly after to take mom and baby to the closest hospital.

Second time’s the charm? We know that a car ride can help lull baby to sleep—but can it also induce labor? In an extremely rare repeat, Christy Henry gave birth in her car for the second time. Yep, you read that right. After two trips to the hospital that ended up being false alarms, when the real moment came, it came quickly. The couple tried to avoid another car delivery but didn’t make it very far before baby arrived. Henry joked, “Maybe they’re all going to be NASCAR drivers when they get bigger.” A piece of advice: Always keep the car stocked with emergency supplies and a full tank of gas!