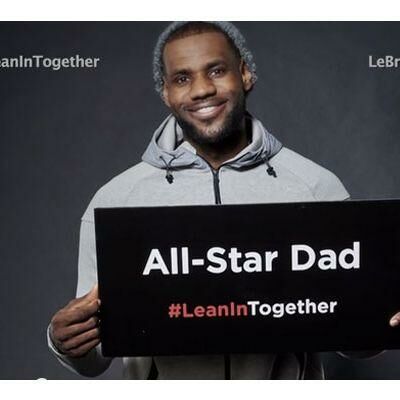 Two years after Facebook’s COO Sheryl Sandberg released her best-seller Lean In and launched a movement for women to embrace their workplace ambitions, her organization has a new initiative: getting men to “lean in” too.

Sandberg announced the “ Lean In Together” campaign earlier this week, partnering with ESPN, the NBA and the WNBA to get the message heard that, "When men lean in for equality, they win—and so does everyone else.” The organization encourages men to fight for equality both at home and in the workplace, as both employees and managers.

The new campaign kicked off with a series of videos featuring famous athletes, actors, government officials and other celebrities sharing their support and stories of the encouraging men they’ve have had in their lives. The campaign has gone viral with others including Reese Witherspoon , Hugh Jackman , Gwyneth Paltrow and Beyoncé posting messages on Facebook, Twitter and Instagram:

The Lean In website offers advice for how men can ‘lean in’ and be a 50/50 partner when it comes to parenting and household chores.

“Once men start to lean in in the home, once these changes at work become as important to men as to women because they both need change to be the parents they want to be, think of how that can drive change,” Sandberg tells Yahoo.

Want to show your support? Post an image on social media showing why you support gender equality and how you #LeanInTogether with your partner!