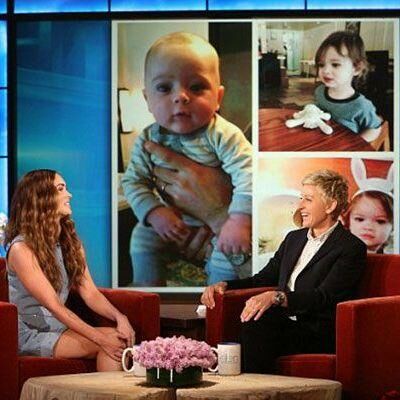 Megan Fox  and Brian Austin Green have some gorgeous babies, y’all. The actress gave birth to baby boy Bodhi Ransom two months ago, and Noah Shannon 19 months ago, and hadn’t released any photos of her sons, until now — and we have Ellen DeGeneres to thank for that! Megan appeared on The Ellen DeGeneres Show yesterday and revealed a few snapshots of the boys, showing off cherubic faces and full, pink, cute-as-can-be lips.

“Bodhi is the little chubby one and then Noah is the one with the lips,” Megan told Ellen. “He’s too young to get injections in his lips like that. He shouldn’t do that that early,” Ellen joked back.

But in all seriousness, Noah’s lips are amazing — he definitely got it from his mama. And what did his mama get from Bodhi? Lots and lots of morning sickness on the set of her new movie, Teenage Mutant Ninja Turtles.

“[It’s] an action movie and requires a lot of running and jumping and stunts. Anyone that’s been pregnant knows your first trimester can be pretty rough and you’re nauseous all day long,” Megan says. "The producers would come see me in the morning in the makeup trailer and I would be clinging to a box of saltines. We kept pickles in the refrigerator for me and I was just constantly on the verge of vomiting.”

Well, at least something cute eventually came from all the sickness!

Did you get morning sickness during your first trimester?