But it caught your attention, didn't it?
ByAnisa Arsenault
Associate Editor
PublishedDec 2016 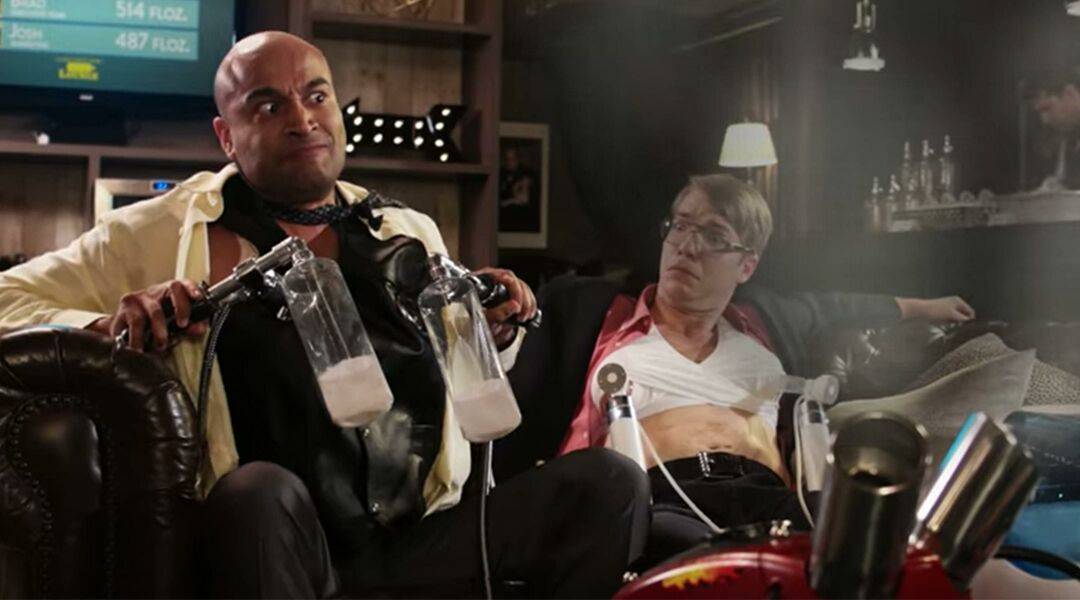 If men were the ones who breastfed, we’d see a totally different culture surrounding nursing, pumping and workplace support. And we might even see some lactation-aiding fried chicken. That’s the message Naya Health is trying to get across in a hilarious viral video released earlier this week, depicting an alternate universe in which men breastfeed—and get a ton of perks for doing it.

If you haven’t seen the video, here’s a quick rundown: Bosses are extremely supportive, employers provide a lactation lounge, pumping is a competition tracked on a leaderboard and a bartender keeps your pump’s parts clean. Oh, and the breast pumps are incredible: the Nursecedes LS, the iPump, the NordicVac, the Express Master Turbo, etc.

The video showcases a world where pumps are either ultra-efficient, streamlined, user-friendly or luxe. Naya’s goal? To combine all of those qualities into one pump while sparking a larger conversation about how we support nursing moms.

“I think our brand in general is very unexpected,” Janica Alvarez, Naya Health co-founder, tells The Bump. “We are really advocating for mom; there’s so many brands out there that advocate for baby. One way we can do that is by registering empathy through humor.”

The video has certainly done just that; it garnered seven million views within two days of posting. It’s resonating with men and women, who Alvarez says are getting a kick out of the Nursecedes LS pump and the Harley Davidson-inspired pump, in particular.

Another group who got a kick out of the video? The actors.

“They totally got it,” Alvarez says. “Some are friends of the director; he knew that the guys he was selecting had really good senses of humor. And they weren’t afraid to look silly. Artificial breasts strapped to your body and you’re wearing a bra—it takes a really confident man. Some of them are fathers and that drove their motivation to get involved.”

It was the job of these actors to communicate an uncomfortable reality: “If men were responsible for providing milk to their babies, they would have everything they needed,” Alvarez says. “What would that look like? What would guys like to do?”

Those questions led to an elaborate vision, culminating in a sort of man cave/poker room/bar combination that makes pumping at work look like this:

Instead of the more depressing reality:

“The set blew me away,” Alvarez says.

It also blew passersby away.

“The filming took place in a swanky hotel lounge in San Francisco,” she says. “We had to replace very classy wall art with images of men—like George Washington—breastfeeding. But the lounge was still open to hotel guests on the day they put up the set. It was really funny to have people walk in and look around with this ‘Where the heck am I?’ look on their face. One of the hotel guests even walked by and tried to take a piece of the ‘lactation fried chicken.’”

Boosting milk production with fried food may not be a reality just yet, but the Naya pump certainly is the pump of the future. It uses flowing water to facilitate a fast, quiet and clean pumping session, and the founders consider its suction level its biggest asset. Plus, it’s really pretty.

“We will continue to support moms and create technology they ask us to create,” Alvarez says. “We’re advocating for better technology and better accommodations for breastfeeding women, and we wanted to spark a conversation with both men and women. We’ve been so pleased with the acceptance and enthusiasm for the video so far.”

How Long Pumped Milk Lasts in the Fridge