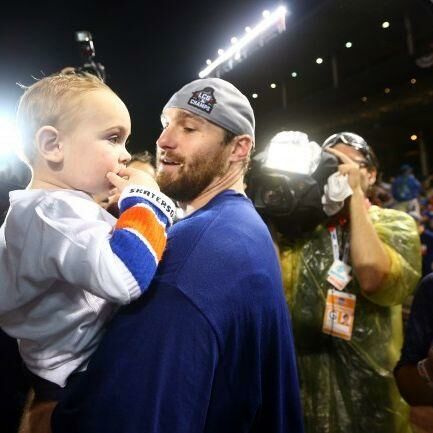 Whether you’re a baseball fan or not, chances are you’ve seen Daniel Murphy’s name making headlines this week.

Despite the buzz surrounding Daniel Murphy this week, his MVP days actually started long ago. In 2014, Murphy made headlines for missing the first two games of the season. Why? Because he prioritized being with his wife while she delivered their son, Noah.

In a interview with TODAY following the birth of his son, Murphy made it clear that missing the delivery to play baseball was never a question for him and his wife.

“That never crossed, I don’t think, my mind or her mind,” he said.

Murphy received harsh criticism from several sports announcers for his decision. On his show, Boomer and Carton, former NFL quarterback and TV host Boomer Esiason offered up his opinion on how Murphy should have handled things: “I would have said, ‘C-section before the season starts. I need to be at opening day. I’m sorry, this is what makes our money. This is how we’re going to live our life. This is going to give our child every opportunity to be a success in life. I’ll be able to afford any college I want to send my kid to because I’m a baseball player.’” Co-host Craig Carton was also quick to pass judgment, instructing Murphy, “Get your a— back in the game and you play baseball.”

Perhaps the criticism is due in part to a generational divide. Murphy’s decision aligns with the beliefs of many millennial dads (ages 25-34) who are putting family first. A recent report from Boston College that surveyed fathers found that 94 percent of the respondents agreed with the following statement: “If I were considering taking a new job, I would consider how much that job would interfere with my ability to care for my children.”

Millennial dads are more likely to share in childcare duties with their spouses/partners than Baby Boomers, demonstrating that ‘the new dad’ sees himself as both a parent and a professional. Thankfully, the New York Mets supported Murphy’s decision to be with his family. “He had our blessing to be with his wife,” said Mets spokesman Jay Horwitz. Although with only three days of paternity leave, Major League Baseball’s policy is hardly a home run compared to some other national corporations.

We’re happy to see more dads opting for a hands-on approach to parenting. It looks like they’re taking our advice!