Michael Bublé Reveals Meeting His Baby Was Like ‘Meeting A Stranger’ 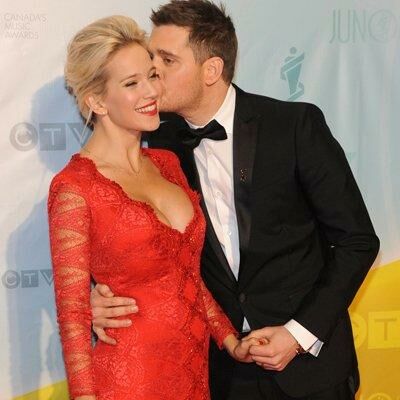 New daddy Michael** Bublé  may know the way to our hearts with a microphone, but when it came to meeting his son,  Noah** , he admits it wasn’t exactly love at first sight. Though he was prepped and ready to fall head over heels for his newborn son, Michael said that, "You can’t explain it until it happens — it’s like telling somebody what water feels like before they’ve ever swum in it.”

On The Social, the singing sensational admitted that he “didn’t have that overwhelming feeling of love,” and after a bit of a shock response from the audience, he added, “I’m being honest with you. I’d heard all of these stories about how this moment was life-changing, but it wasn’t like that for me. I was nervous for my wife and I was happy that he was healthy … but, that day, it was like meeting a stranger.” Kudos to Michael for his honest, candid confession. What he’s saying holds true for a lot of parents — both moms and dads:

“I didn’t feel much for daughter until she was at least a week old. I think I was too overwhelmed and scared and tired. I knew I would though and by golly I love that little girl with everything I have.”

“My daughter was taken to another hospital hours after I delivered her due to a complication so for the first 17 hours of her life I wasn’t even with her. I didn’t really bond with her for a while and felt horrible for not loving her right away like everyone says you are supposed to.  For the first few weeks of her life we called her Stranger Baby.”

“It took some time but I think I fell in absolutely love with my son once he started developing his little personality.”

“I didn’t feel much of a connection with my son until he was about 3-4 months old because I had postpartum depression.”

“It wasn’t love at first sight for my partner and I and we are completely fine with that. A few days later though, we were both smitten!”

“I feel like I did fall in love with my first-born son right away. However, the same was not true with our second child — it was just different, and I’m not sure why.”

“I wasn’t in love with my daughter after I gave birth but I think part of that was due to the fact that Part of it is that I didn’t even hold her until an hour after she was born. I was in so much pain after delivery that I didn’t want to touch her, and by then grandparents, aunts and friends were swarming around and passing her like a hot potato!”

“I started to really fall in love once we got home and I was able to relax and actually have a moment to ourselves.”

But a day later, Michael said, when he was spending some daddy-and-son time with Noah, the reality of fatherhood finally sank in. “That next night,” he told the crowd, “I was looking at him and all of a sudden, I got it.”

Now, he sings to baby every chance he gets — to soothe him, to rock him to sleep and just to spend time with him. sing to him all day and all night. When he’s crying with somebody else and I hold him and I sing to him, he just stops. It’s really cool. The songs I’m singing are not my hits — that’s for sure. My number one go-to right now is ‘Down by the Bay.’"

Was it love at first sight for you and your baby?