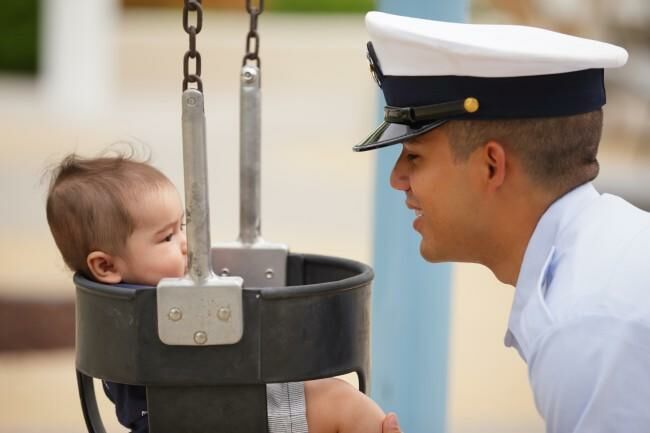 We’ve said it before (and we’ll say it again), military parents have one of the toughest jobs in the world. But recent news may make it easier.

U.S. Defense Secretary Ash Carter has unveiled a pilot program that will pay for troops to have their sperm or eggs preserved. That way, if they—and their reproductive organs—are hurt while in combat, they’ll still be able to have a family. Additionally, it extends the amount of time women in the military have to pursue their careers. Currently, women who’ve served for 10 years have a retention rate 30 percent lower than their male counterparts. Carter hopes that more family-friendly initiatives will change that.

Last week, Carter announced another family-friendly plan: a 12-week paid maternity leave for all active military members. This new policy doubles the amount of paid leave previously granted to women in the Army and Air Force. Unfortunately, it scales back the leave policy in place for the Navy and Marines, cutting back their 18 weeks paid leave to 12 weeks

“I concluded that twelve weeks of maternity leave across all of the force establishes the right balance between offering a highly competitive leave policy while also maintaining the readiness of our total force,” Carter said at a press briefing.

Why the change? It’s an effort to increase retention among women in the military. “Women at peak ages for starting a family leave the military at the highest rates,” Carter said.

Don’t worry, he didn’t forget about dads! Carter plans to extend the military’s paid paternity leave from 10 days to two weeks. He also outlined plans for extending the paid leave offered to adoptive parents, who are currently given a three-week leave. Before any changes are made to paternity and adoption leave policies, Carter needs Congress’s stamp of approval.

Carter’s plans to modernize the military don’t end with parental leave. In an effort to make the military more family-oriented, Carter announced plans to create 3,600 breastfeeding rooms across the country, ensuring there is a lactation room in every military building that has more than 50 female employees.

“These rooms must be a designated, clean, and private space that is not a restroom. The room must also be equipped with electrical outlets, as well as table and chair access for each person using the room,” Carter said.

What about military families that already have kids? Carter wants to expand access to childcare on military bases by extending the time that facilities are open, from 12 to 14 hours each day.

Carter also proposed a big change that would allow some troops to choose the location where they’re stationed. What’s the catch? In exchange for more authority over their duty station, members must agree to serve more time in military.

We’ve seen some major family-friendly changes to the military in recent years, in an effort to balance the needs of parents with the needs of the country and we’re hoping that these changes are just the beginning.