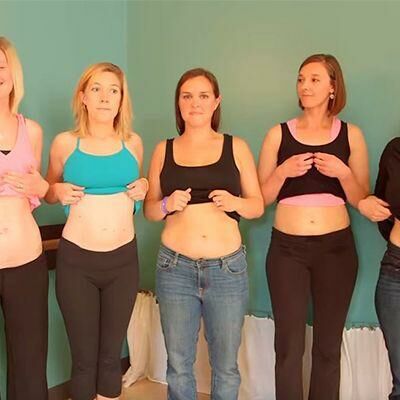 Pregnancy can be tough, but life after baby isn’t always smooth sailing either.

Between the frustration of trying on a pair of pre-baby jeans and that don’t zip to catching a glimpse of stretch marks in the mirror, at one point or another, moms often feel pressure to change their bodies and rid themselves of those ‘imperfections.’ But one Minnesota mom is trying to change that, encouraging women to embrace their postpartum bodies and remind each other that those scars and stretch marks are badges of honor, signs of creating a tiny human who is likely crying in the background as you read this.

Last month Angie and Mike Sonrode, parents to four children under 11 years old, launched a fundraising campaign for “Mid Drift,” a documentary they’re hoping to make that will explore how postpartum bodies are perceived around the world.

Through her work as a doula, Angie’s heard more than a few moms express frustration with their post-baby bodies and “how they had ruined their bodies” by becoming pregnant. It wasn’t until she became a mom that she truly understood the frustrations and embarrassment that her peers had expressed.

“If you Google ‘postpartum body,’ you will come up with weight loss ideas and plans for reducing cellulite and stretch marks. I don’t want to think 'I love my body except…’” she says in a video about the project.

Sonrode was also encouraged by celebrities speaking out about the pressures to bounce back quickly after baby, like Jennifer Garner, who opened up on The Ellen Show about her post-baby body. “I’ve had three kids and there is a bump. From now on, ladies, I will have a bump and it will be my baby bump. And let’s all settle in and get used to it. It’s not going anywhere,” Garner proudly declared. Sondrode says these words now serve as the foundation for the Mid Drift Movement.

And it’s not just a project for moms; a key component of this project is giving fathers and partners a voice. “We’re kind of on a quest to see, you know, are other cultures out there where postpartum body image really doesn’t exist? Or maybe it’s not that big of an issue, and why is that?” Mike says.

The Sondrodes aren’t the first to encourage women to embrace their bodies after baby, but they are the first to use film as the medium to give moms a louder voice. Photographer Ashlee Wells Jackson started a photography project, 4th Trimester Body Project, to give women an opportunity to showcase their postpartum bodies, stretch marks and all.

Watch the video below to learn more about the Mid Drift Movement, then  visit their website to learn more ways you can get involved or share your story.