Needless to say, his dad has since removed the battery from the toy.
Save article
ByStephanie Grassullo
Associate Editor
PublishedJul 2019 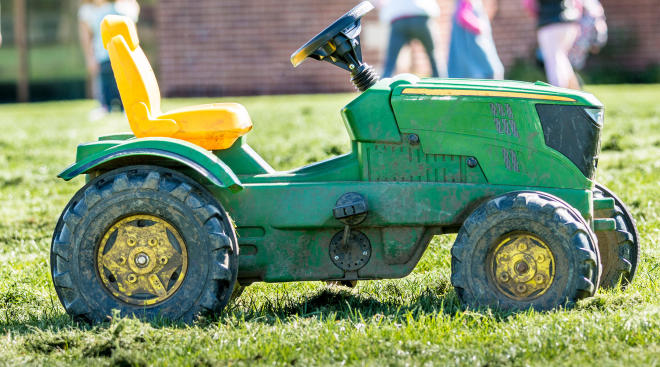 A Minnesota boy had his eyes on the prize this past weekend. His town was holding its Chisago County Fair, and the 2-year-old refused to miss out on any of the action. Taking matters into his own hands, the youngster hopped on his John Deere toy tractor and set off towards the fun. It wasn’t until a little later on when his frantic father was finally reunited with him, according to a 13 WTHR report.

Officers at the Chisago fair were on duty when they received a call about the missing 2-year-old who drove his toy truck away from home. Luckily, it didn’t take too long to track the kid down. Living only a block away from the festival, the youngster hopped on his truck and rode down the sidewalk, through a back gate and around crowds to get to his favorite ride at the fair, the Tilt-a-Whirl. The Sheriff’s Office jokes about the day’s events on Facebook, saying Dad “promptly suspended his son’s license by removing the battery from it.”

Leave it to toddlers. Those rambunctious tiny tots have a knack for attracting trouble the second you blink your eyes. Earlier this year, another 2-year-old boy managed to get himself stuck in an arcade claw machine while his parents weren’t looking. Panic-stricken, the couple frantically worked to get their son out. After many failed attempts at a rescue mission, first responders were called to the scene. Once the little one was safe and sound, Mom and Dad were able to look back at the situation and laugh. Every family has that one kid, right?