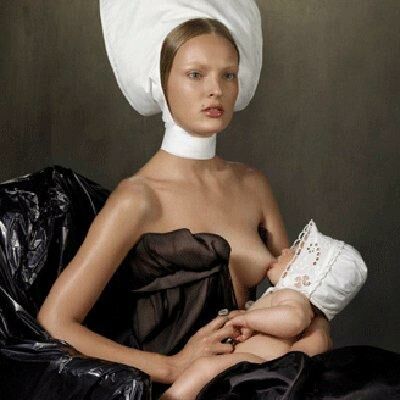 Printed in the October 2013 issue of Vogue Netherlands, model Ymre Stiekema poses topless in a Vermeer-esque inspired spread and is photographed breastfeeding her baby. The photos, entitled “The Master & the Girl,” are the first to show a mom breastfeeding her child since the now infamous TIME Magazine attachment parenting cover.

The fashion style guide’s Dutch edition is no stranger to controversy — back in April, the Netherlands mag’s “Heritage Heroes” spread depicted models in blackface for a fashion spread. This time around, it looks as though the _Vog_ue editors wanted to take on another hot topic: Breastfeeding.

Vogue isn’t the first magazine to place a breastfeeding mom on its pages. W magazine broke the mold in 2008 when they placed a coy photo of Angelina Jolie breastfeeding on its cover and who could forget the controversy-stricken _TIME _cover shoot where 26-year-old mom of two, Jamie Lynne Grument, was snapped breastfeeding her almost four-year-old son.

In the interview, Grumet revealed that she is a big proponent of attachment parenting and has two children (an adopted son and a biological son). She told TIME that she understands the critics who question extended breastfeeding and attachment parenting, but believes it’s a normal parenting style: “They are people who tell me they’re going to call social services on me or that it’s child molestation. I really don’t think I can reason with those people. But as far as someone who says they’re uncomfortable with this, I don’t think it’s wrong to admit this. But people have to realize this is biologically normal. It’s not socially normal.The more people see it, the more it’ll become normal in our culture. That’s what I’m hoping. I want people to see it.” The Vogue photo seems to want to do the same thing: Socially normalize what’s biologically normal, and remove the bias on breastfeeding.

In the particular breastfeeding photo, Ymre nurses her baby, dressed in a bonnet while decked head-to-toe in high fashion garb. It’s definitely not a photo of the everyday mom, but still, it’s beautiful.

What do you think: Will this Vogue spread spark controversy or will it help “normalize” breastfeeding in our culture?