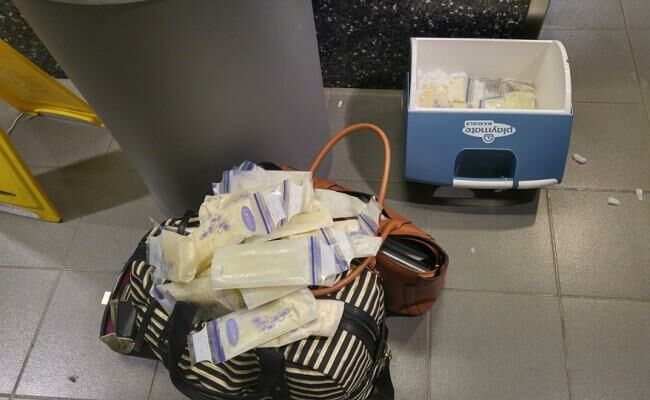 As a new mom, it’s extremely difficult to be away from baby for an extended period of time, but it’s even worse when you’re nursing.

While traveling for business, Vanessa Kasten Urango, a Texas mom of two, was told by Delta Air Lines that she could not travel with frozen breast milk. The angry mom took to Facebook to document her dissatisfaction.

“I spent the last eighteen days away from my children and husband for work,” she wrote. “During this time, I had to pump at least four times per day to maintain a breast milk supply for my infant daughter and kept this supply in a freezer.”

As we know, building up a stash is tough stuff. To make sure she transported it home safety, a week before her flight, Uragno contacted Delta for instructions on how to travel with breast milk. She was told to pack the frozen breast milk in a cooler with dry ice, which needed to be less than 5.5 pounds, in a labeled cooler.

As per Delta’s instructions, Urango arrived at the airport with her cooler and dry ice, only to be told by Delta employees that she could not take the breast milk with her.

“When I showed up to your ticket counter at EWR, the ticketing agent told me that I would have to pay $150 to check the $25 cooler because I already checked two other bags. In addition to this, he had no idea how to handle my cooler with dry ice,” she wrote. “Long story short, they told me I could not take the breast milk on the plane because they couldn’t weigh the dry ice (just curious how they would ever weigh dry ice??) and because I didn’t have the proper sticker on it to show it contained dry ice.”

With the help of airport police officers, Urango created a new plan for transporting the breast milk: She would get rid of the dry ice by trashing it in an airport bathroom and use her cooler full of frozen breast milk as her carry-on luggage.

Since posting, Urango’s Facebook post has received over 8,000 likes and almost 4,500 shares, with many users calling her experience “appalling” and an “embarrassment” for Delta.

“People really just don’t get the challenges of breastfeeding and pumping,” one Facebook user comments.

Another one encourages all moms to familiarize themselves with their rights and TSA guidelines, writing, “Always know your rights as a nursing Mama when you travel—print out TSA guidelines and rights.”

Despite her fear that, without dry ice, the breast milk would spoil by the time she returned home, she updated her status to inform her supporters that the breast milk survived the trip.

According to the TSA website, formula, juice and breast milk for infants or toddlers over the 3.4 ounce liquid limit are permitted through security. Additionally, ice packs and other accessories required to cool the breast milk are allowed as a carry-on.

Situations like this have prompted companies like IBM and Twitter to ship breast milk from moms traveling on business home to their babies. But we have a long way to go before it’s the norm.