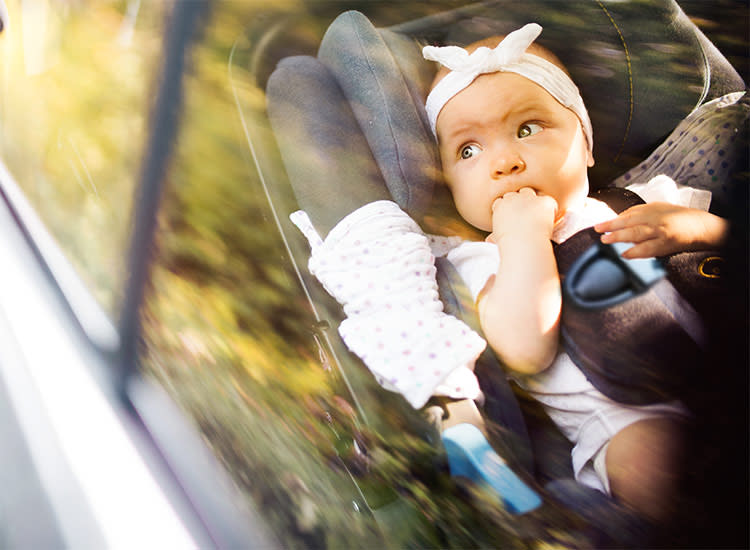 “It was the most traumatic 15 minutes of my entire life and we are so thankful our daughter is okay.”
PUBLISHED ON 08/24/2018

After a day spent at her grandmother’s, Lacey Guyton loaded up the car, secured her 2-month-old baby into the car seat and threw the diaper bag into the back seat. But when she closed the door and heard the click of the door locks, she realized her keys were in the diaper bag, and suddenly found herself facing a real-life nightmare: Her baby was trapped inside the car and she had no way to unlock the doors.

While the panic-stricken mom tried to break the passenger window, her grandmother called 911. But despite the gravity of the situation, the dispatcher failed to offer any help.

“I grabbed a huge chunk of asphalt off the ground and started bashing it on my front passenger window as hard as I could, and it was doing nothing,” Guyton shares in a Facebook post. “The 911 dispatcher told my grandma to call a tow company because they don’t send anyone out to unlock cars or break windows...I didn’t have time to wait for a tow company as my baby is screaming and getting hotter in the car.”

Ater what was the “most traumatic 15 minutes” of her life, Guyton thankfully was able to rescue her baby on her own. In a now viral Facebook post, she shares her scary story to warn any parents who find themselves in a similar situation, and to call out the dispatcher who failed to do her job.

In a second attempt for help, the mother tried calling 911 again to alert them of the emergency situation. “I called 911 back and told her again my 2-month-old is locked in a hot car and asked her to please send a fire rescue just to smash my window,” she shares. “Again, she told me she would transfer me to a tow company.”

Guyton called the tow company but continued to try to smash the windows on her own. As time passed and her daughter, Raina, was still trapped inside, Guyton became more and more desperate to get her out. “I checked on Raina again real quick and saw she stopped crying and was starting to close her eyes. At this point I didn’t know if she was going to sleep or if my baby was dying.”

Thankfully, when Guyton switched gears and tried to break the back windshield, after two hard hits it finally shattered. “I’ve never felt more relieved,” she says. The tow truck finally showed up 12 minutes later, which could have been too late.

“It was the most traumatic 15 minutes of my entire life and we are so thankful our daughter is okay, but we’re extremely pissed that after calling 911 twice for our daughter’s life on the line, a dispatcher whose been there for years, still refused to send help,” she says.

The local chief of police personally reached out to Guyton to apologize on behalf of the dispatcher, who will receive more training in light of this incident.

Guyton was right to be so concerned: Even with cracked windows, it can reach 125 degrees in a car in a matter of minutes—and children have died of heatstroke in car temperatures as low as 60 degrees. Lots of parents think they would never forget their kids in the car, but it can happen to the best of us. When you arrive at your destination, always check the backseat to avoid a similiar scary situation.