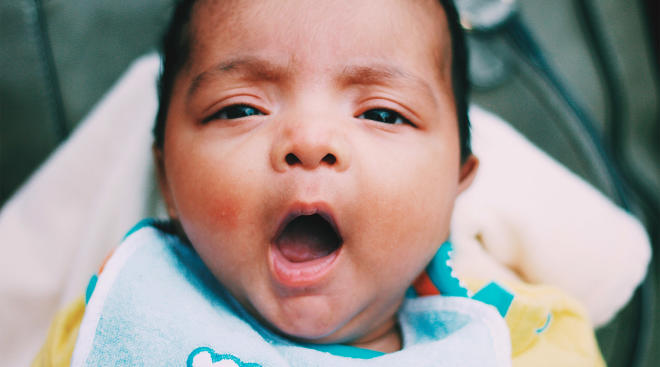 Sometimes it feels like being a parent today and receiving unsolicited feedback on your parenting style go hand-in-hand. From breastfeeding to pregnancy and post-pregnancy body shaming, it seems like moms just can’t win (meanwhile, dads often get a free pass. Today, four out of five millennial moms say they’ve experienced mom-shaming. And Australian blogger Constance Hall is fed up.

Hall recently gave birth to a son, which she posted about on her social media accounts. It contained a photo of herself shortly after giving birth in which she can be seen sipping a soda and looking at her phone while her husband Denim Cooke is near the foot of her hospital bed caring for their baby.

“Possibly my favourite photo from the birth of Raja,” Hall captioned the black and white shot captured by photographer Trina Cary.

It seems like a sweet (and well-earned) moment of relaxation for the mom of five who delivered Raja via c-section. And many people celebrated the photo alongside her, especially those who understood just how great it feels to have that first treat after giving birth.

“When I was in labor a nurse told me I was allowed to have a Pepsi,” one of Hall’s followers commented. “In that moment I knew everything was going to be alright.”

“I had GD during pregnancy and KFC was all I wanted,” shared another. “The second my son was born I sent my mum to buy me a massive bucket of chicken. I have zero regrets.”

“After my second, I had my bff bring me a feast of Taco Bell shit food to binge on while everyone crooned over baby,” said a third. “Yes, I was thrilled to meet him. But damn, I needed a feast and a moment!”

Alas, as mom-shaming becomes more and more mainstream, a handful of critics also felt entitled to weigh in.

"It’s important to check your phone,” one person commented sarcastically.

But Hall was not having it. In a follow-up post, the momma bear let loose on her critics.

“Yesterday I posted a picture of myself on the phone the day my son was born,” she captioned a shot of herself looking peaceful and happy at the beach. “And of course it was followed by a few fuckers and their stuck up judgments about what I was doing on my phone instead of spending my every second doting and being the eternally grateful goddess mother.”

And she’s right. Too many people expect mothers to be soaking in the bliss of parenthood 24/7 when that’s just not realistic. Parenting is hard and messy and everyone feels overwhelmed at times. Plus, as the majority of commenters pointed out, Hall had just done the hard work of childbirth and deserved a moment to be “off duty” and breathe. The idea that someone would criticize her for doing exactly that is so unexpected that Hall says she was completely unaware of the negative comments until some of her followers started messaging her about them.

“I didn’t even know that any of this had happened until upset Queens [the name Hall uses for her followers] were messaging me,” she shared in her follow-up post. “The truth is, it’s nobody’s business what a mother is doing on her phone the day she gives birth. If she’s sending her children and mother photos of the baby or googling tit jobs in Thailand, it’s not your business. In fact, the way another mother is mothering is not your problem.”

The outspoken blogger goes on to clarify that the only time another person has a right to weigh in on someone else’s parenting style is if they suspect the child is being abused. Apart from that, however parents choose to parent is not up for discussion.

“So thank you Queens who came into bat for me,” she finished the post. “…And please don’t be concerned about me. I couldn’t care less about these comments. I’m on the beach, with five of my kids in the sun with the Dolphins at Monkey Mia.”