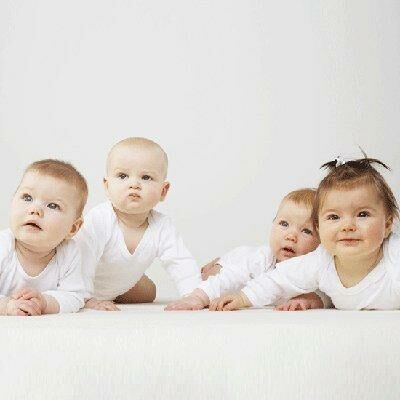 When Nebraska mom Sabrina Negus gave birth to four babies at once, her doctors had another surprise for her: Her boys weren’t quadruplets!

Logan, Mason, Porter and Connor Negus were born to at the same time — to the same mom — but they’re what doctors are calling “triplets, plus one” because the boys came from two eggs inside mom’s uterus. In a typical multiples pregnancy, each of the boys would come from their own egg (four eggs total). When the Negus’ babies were born, three of the boys shared one placenta and developed from one egg, while the fourth baby, Connor, developed separately by his own egg. But here’s the real crazy twist: They boys are still considered quadruplets, even though they’re not. The fact that mom gave birth to all four boys at once makes them quadruplets, even though scientifically, they’re not true quads (because three were born from the same egg and placenta and once was born from a different egg). Crazy, huh?

According to Sabrina’s perinatologist (a doctor that specializes in the care of the fetus and complicated, high-risk pregnancies), Dr. Todd Lovgren, told  a local Nebraska newspaper in Omaha that, “Sabrina’s pregnancy was one in a million. In fact, there have been fewer than 100 pregnancies of this type reported in the United States!” But the honor came as a shock to almost everyone at first — including mom! Sabrina told the paper that her unique pregnancy surprised her and her husband, Lucas. The couple had undergone fertility treatments after years of trying for a baby together and even though they’d originally expected twins, they discovered two additional babies during an early ultrasound. She said, “I was a little shocked. Lucas couldn’t believe it. I just laughed.”

After Sabrina, Lucas and her team of doctors’ discovered the two surprise babies, Sabrina’s pregnancy was categorized as “high-risk”. She was monitored regularly and hospitalized for 11 weeks at one point, before doctors decided to deliver the four babies early — due to concerns about their health in utero.

It took 33 hospital staff members and two separate operating rooms (wow!) to deliver the Negus’ boys, who were born at 31 and 1/2 weeks on January 8, 2013. The babies came out healthy and screaming — a sign that gave new mom Sabrina the most relief. “It’s nice to have healthy babies,” she said. “It was a scary and stressful pregnancy. It was one that had its ups and downs, but when we heard them crying at the delivery — it was a very good sound.”

Since then, the Negus family has been enjoying the incredible progress their boys have made in the past six months. New daddy Lucas said, “Everybody with kids always says they grow fast and enjoy. And, man!” Sounds like he realizes just how quickly his boys’ are growing and changing.

And as for the joys of first-time parenting, mom and dad are savoring the highs — and lows — of life with four boys. “We’re incredibly real blessed. I mean, there’s not a thing wrong with these guys. They are absolutely healthy and you could not ask for anything more than that.”

*Note: The above photo is not a photo of the Negus babies.

Can you believe this story?