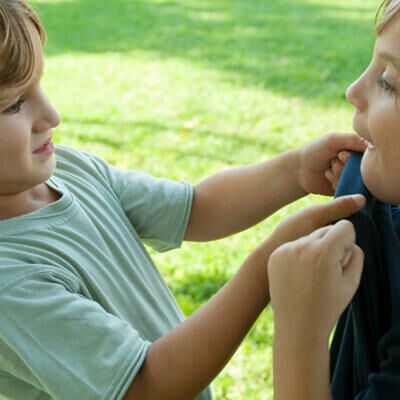 In between supervising play time and lunchtime, two day care staffers let their own imaginations get a little out of hand.

Erica Kenny and Chanese White, now former employees of the Lightbridge Academy day care facility in Cranford, NJ, have been charged with child abuse for allegedly encouraging kids to get physical.

The teacher and teacher’s aide were investigated following an Aug. 13 incident where Kenny sent videos to friends on Snapchat of children ages 4 to 6 fighting and shoving each other. She seems to have forgotten rule no. 1; prosecutors say she can be heard on the videos referencing quotes from the book and movie Fight Club.

“Approximately a dozen boys and girls at the day care center can be seen in the video clips shoving each other to the ground and attempting to strike each other,” prosecutors said.

“As parents and caregivers, we are shocked and saddened by this isolated incident and we have assisted the prosecutor’s office from the start of its investigation into this matter,” Lightbridge Academy said in a statement.

Fortunately, there have been no reports of injuries, but the school is taking the videos seriously and cooperating with the investigation. “We have a zero tolerance policy for anyone who acts in conflict with the core value of Lightbridge Academy – the safety and well-being of children.”

Worried about what goes on at your day care? Follow these tips choosing the right one and finding out what’s really going on during the day.