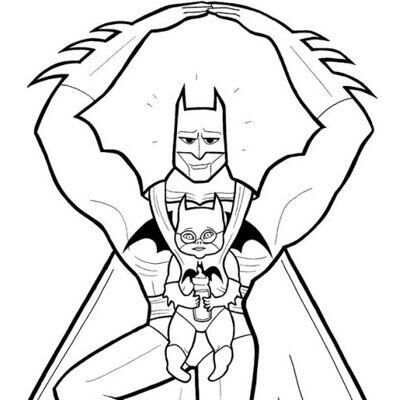 A baby-wearing Batman? A super-sad Superman? These are some of the cartoons Linnéa Johansson created for her superhero-themed coloring book, which showcases a more sensitive side of these traditionally tough guys.

While Johansson, who lives in Norway, has been drawing since she was 17, this idea came to fruition when her three-year-old son Caspian left preschool choking back tears.

“It looked so painful the way he was making such an effort to literally swallow his tears,” she tells the Huffington Post. And Caspian said he wouldn’t cry, “because Spider-Man doesn’t cry.”

“This to me is the proof that, it takes only three years for a child to learn the ‘gender code’ — that as a boy, the worst thing you can do is to ‘cry like a girl’ and that he needed to ‘man up’ and ‘stop crying.’ The signal it sends out to a boy is that emotion equals weakness,” she says. “Children need to relate to real and emotional role models.”

So it was straight to the drawing board for Johansson, who cranked out a “Spiderman Pooping” cartoon.

We have superheroes who bake, one who cuddles cats, and one on-pointe Batman.

Next up for Johansson? A strong princesses coloring book. You can see and download all of her images   here.