This Pregnancy Hormone Can Predict Your Risk of Postpartum Depression

Researchers were even surprised by this correlation.
ByAnisa Arsenault
Associate Editor
PublishedMar 2016 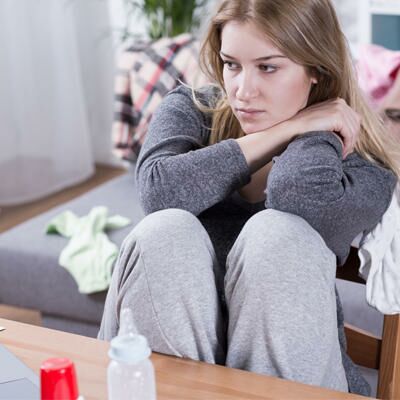 Some refer to it as the “love hormone,” while others call it the “cuddling hormone.” It gets released as you breastfeed and practice kangaroo care and is essential to bonding with baby. But a new study found a surprising link between oxytocin and postpartum depression risk, revealing that higher oxytocin levels during the third trimester may be indicative of depressive symptoms after baby is born.

These results from Northwestern University’s study, published in the March 8 volume of Archives of Women’s Mental Health, surprised researchers. Lead investigator Dr. Suena Massey says she expected lower levels of oxytocin during pregnancy to be linked to postpartum depression. But she’s come up with a theory as to why results say otherwise.

“There’s emerging research that a past history of depression can change the oxytocin receptor in such a way that it becomes less efficient,” Massey says. “Perhaps, when women are starting to experience early signs of depression, their bodies release more oxytocin to combat it.”

To come to this conclusion, scientists recruited 66 healthy pregnant women who were not depressed, measuring oxytocin levels during the third trimester and depression symptoms six weeks postpartum. Their symptoms included trouble sleeping, anxiety, aches and pains, changes in appetite, changes in bowel patterns and feeling sad. The higher a woman’s oxytocin levels were during pregnancy, the more depressive symptoms she demonstrated six weeks after birth.

“It’s not ready to become a new blood test yet,” Massey says of her team’s procedure. “But it tells us that we are on the track to identifying biomarkers to help predict postpartum depression.”

Although the hormone-depression connection they found was unexpected, the Northwestern team isn’t the first to indicate that you can—and should—screen for postpartum depression during pregnancy. A study published earlier this year in The Lancet Psychiatry recommends that physicians screen pregnant women for depressive symptoms before they give birth so that they can receive proper and effective treatment as soon as possible.

This Pregnancy Hormone Can Predict Your Risk of Postpartum Depression