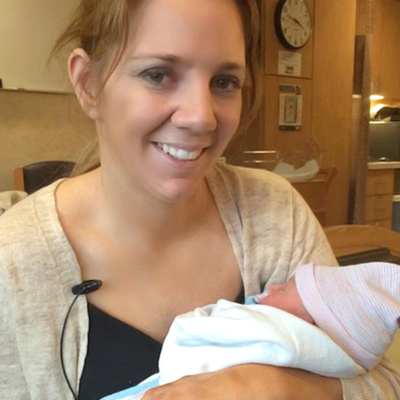 You might remember Chapman as the “paralyzed bride” who broke her neck after being playfully pushed in a pool during her bachelorette party. The freak accident left her paralyzed from the neck down, and put the life she’d expected with husband Chris Chapman on hold… especially, the bride-to-be worried, their hopes for having kids.

Now, five years after the accident, Chapman and her husband have welcomed a baby girl, Kaylee Rae, via a surrogate on April 26th.

As part of her recovery, Chapman began taking blood pressure medication that could pose a threat to a fetus, so she and her husband decided to conceive through IVF instead. Laurel Humes, a college friend of Chapman’s, was more than willing to help out. She had been following their story since the accident, and had also been inspired by Humes’s husband’s turn as a sperm donor to a same-sex couple.

“When I heard Rachelle was looking for a surrogate, I told him, 'You helped a couple. I’d like to really make this offer and see if she’d be interested in me doing this for her,” Humes explained to  TODAY.com.

Humes gave birth after three hours of labor on Sunday, giving the couple “the most beautiful gift we will ever receive," wrote an ecstatic Chapman in a Facebook update.

Humes gave birth after three hours of labor on Sunday, giving the couple “the most beautiful gift we will ever receive," wrote an ecstatic Chapman in a Facebook update.