“Babies will drop things as they work on their coordination skills and experiment with their environments. Older infants will even drop things to get mom's attention.”
Save article
ByNehal Aggarwal
Associate Editor
PublishedJun 2020 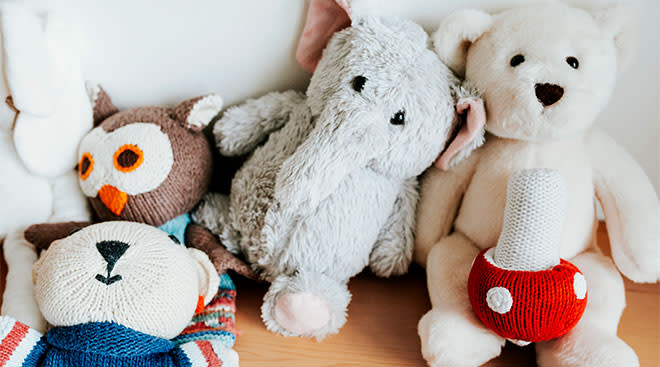 It’s no surprise that the majority of new parents constantly worry about exposing their babies to germs and other dirty objects. Now, a survey conducted by OnePoll in partnership with Philips Avent is finding that many parents feel like they don’t do enough to clean their child’s things.

The survey looked at 2,000 parents with infants ranging from newborns to 6 months old. The survey found that 68 percent of respondents didn’t think they cleaned their infant’s things as often as they should or as thoroughly as directed. Meanwhile, 76 percent said they constantly worried about the cleanliness of the things their baby touched.

On average, babies throw or drop six things in a single day. The poll found that each of these items is dropped, on average, 168 times in a single month. The biggest cleanliness culprit that parents worry about? Plush toys, as 54 percent of parents surveyed said they worry they weren’t disinfecting them properly. Other objects that parents worry they aren’t cleaning enough include baby’s bottle (50 percent) and pacifiers (44 percent). The worry behind both stems from the fact that they are objects that babies constantly throw on the ground.

“Babies will drop things as they work on their coordination skills and experiment with their environments. Older infants will even drop things to get mom’s attention,” Dr. Natasha Burgert, pediatrician and spokesperson for Philips Avent says. “The problem is that when infant toys, bottles, and pacifiers fall to the ground, they can get dirty and come into contact with contaminants. I tell new families to be especially mindful about pacifiers because a pacifier goes into a baby’s mouth.”

The survey also found that, when it came to pacifiers, many parents weren’t familiar with or following best practices for cleaning them. The survey showed 42 percent of parents said they have wiped the pacifier off with their hands, while 36 percent said they had sucked on the pacifier themself to clean it.

“It’s important to know how to clean different items thoroughly and properly to increase their longevity and to ensure they are safe to give a baby,” Dr. Natasha Burgert added. “Look for products that are easy to clean, like the Philips Avent Soothie snuggle. The plush toy and pacifier can be easily detached and cleaned separately and thoroughly.”

The Best Baby Towels and Washcloths for Easy-Breezy Bathtime

6 Instagram Giveaways for You to Check Out, Just in Time for Mother's Day