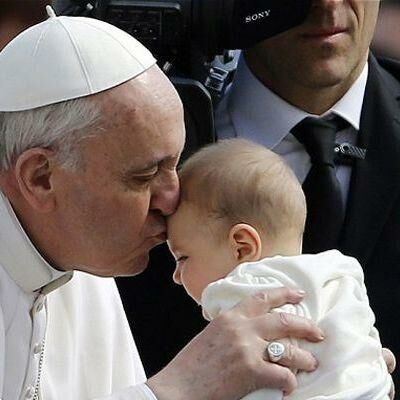 You can't make this stuff up, y'all: Pope Francis supports public breastfeeding. In an interview with La Stompa, the Pope was asked about the state of hungry children in the world and he responded by saying (among other things) that breastfeeding mothers shouldn't be ashamed to feed their babies when they're hungry. (Three snaps for the Pope, you guys!)

He said, "At the Wednesday General Audience the other day there was a young mother behind one of the barriers with a baby that was just a few month s old. The child was crying its eyes out as I came past. The mother was caressing it. I said to her: Madam, I think the child’s hungry. 'Yes, it’s probably time…' she replied. 'Please give it something to eat!' I said. She was shy and didn’t want to breastfeed in public, while the Pope was passing. I wish to say the same to humanity: give people something to eat!"

When the Huffington Post reported the story, they spoke with Denene Milner, a Baptist and former breastfeeding mother. She said, "Honestly, I wish there was this level of deep thinking in my own Baptist church when my daughters were babies and I was breastfeeding," she wrote. "On Sundays when I knew I’d be sitting in a church pew, I’d go out of my way to feed my daughters just before we walked in so that their bellies would be full for a good part of the service, and then I’d be all anxious when they’d start fidgeting."

Not only is the Pope Time magazine's Person of the Year, but it's clear that the Pope is restoring the Church to a go-with-the-flow type of Catholicism that aims to include — not exclude — everyone. And to prove just how little he's bothered by breastfeeding, take a look at this shot taken last March, while he was in Buenos Aires:

Says a lot about his character, doesn't it?

Do you think it's important for public figures to take a stand on breastfeeding?