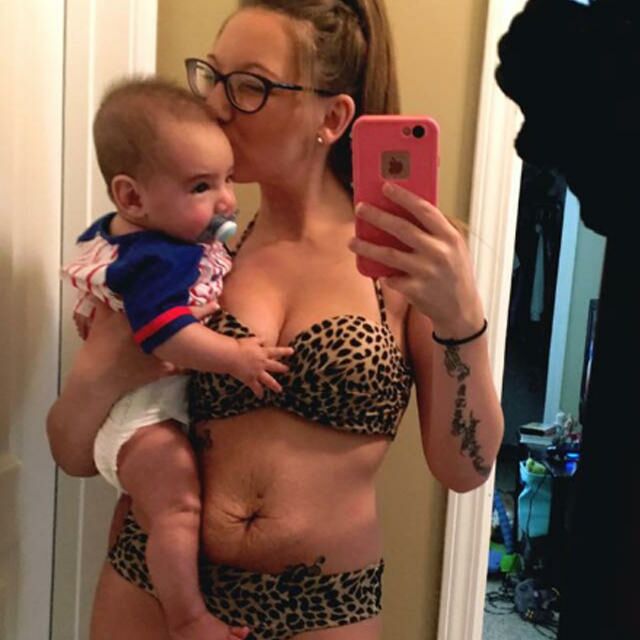 Bikini-Clad Mom Shuts Down Her Shamer

A new-mom milestone not often talked about? Wearing your first bathing suit after baby. So when one Missouri mom visited her local pool with her 4-month-old, the last thing she needed was criticism about her bikini from a fellow swimmer. Lexi Sinclair recounted the interaction—and her response—in a Facebook post.

“While putting Christian’s pool hat on, a woman comes up and makes conversation with me about Christian–asking me his age, how much he weighs, how he sleeps, etc.,” she writes. “She then proceeded to tell me that the men at the pool would feel more comfortable if I was in a one-piece swim suit because a bikini isn’t appropriate for a mother, especially one who’s ‘still recovering.’”

It’s hard to predict how anyone would respond to such a biting remark, no matter how ‘well-intentioned’ it was. Sinclair, though, didn’t become frazzled or teary-eyed. She delivered the perfect rebuttal—and, according to her, toned her anger down.

“Anyone who knows me knows I had a few words for this crazy, ballsy woman,” she says. But instead I just smiled, kissed my son and told her, ‘I’m proud of my body. In just one year I’ve gained 50 pounds and lost 37. I’ve grown a human and given birth to a miracle. My body provided food for my child. So, no, my body might now be the best sight for other men to see. My stretch marks and tummy pudge might not be sexy. But they’re proof that I’ve done something amazing, and I have a man that loves me and finds me even sexier and more beautiful now.”

Sinclair ended on a slightly more aggressive note, telling her critic, “To be honest, I don’t give a tiny rats a** about what other men, or a prissy twit like you thinks. Have a nice day though.”

As for the shamer's reaction? Sinclair tells The Bump the woman was suddenly at a loss for words.

"She kind of stood there open-mouthed and red for a moment. Before she could respond, I said, 'excuse me,' and walked away. I didn't really care to hear anything else she had to say."

Her post, shared over 23,000 times, serves as more encouragement for moms to embrace and appreciate their postbaby bodies. Perhaps Australian mom-blogger Olivia White put it best in her viral post last week: "Puffy face, droopy milk-filled boobs, wider hips and belly full of stretch marks! That's my postbaby reality, no 'bouncing back' here!” White wrote. “And you know what? I couldn't give a sh*t! Because I'm not the same person I was before I had babies, so why would would I want my body to reflect something and someone I no longer am?”

Well said. If you need further inspiration to love your postbaby body, we can help pick up where Sinclair and White left off. Check out our tips here.