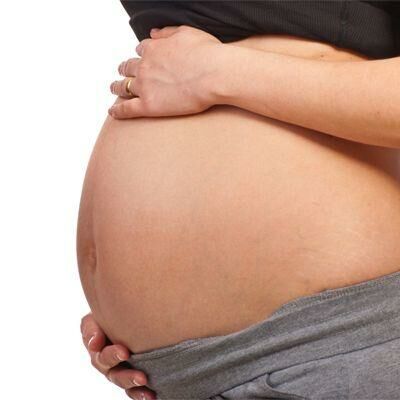 When you’re ‘eating for two’ it’s easy to give in to strong (and sometimes strange!) cravings, and before you know it those pregnancy pounds quickly add up. In reality, doctors say 300 extra calories per day is all you need, and excessive weight gain can have health consequences that put you and baby at risk.

But it’s not just the weight you gain during pregnancy that can harm baby. A new study, published in Pediatrics, found that women who gain too much weight both during and after their pregnancy increase their child’s risk of being overweight.

The study, which analyzed information from over 3,300 Dutch children and their mothers, recorded the mother’s weight gain during pregnancy and her child’s height and weight from birth to age 14. Although researchers didn’t pinpoint a direct cause-and-effect relationship, crunching the numbers revealed that women who gained excessive weight during pregnancy were 20 percent likelier to have overweight children, and those born to moms who gained too much weight before and after pregnancy were three times more likely to be overweight at age 14.

Social and economic factors can play a role, but weight management is important for all women, before, during and after pregnancy. "There are three plausible explanations for the link between pregnancy weight gain and childhood weight: genes, lifestyle and “intra-uterine programming,” van Rossem said.

Since a study published earlier this year found that 47 percent of American women gain more weight during pregnancy than the 25 to 35 pounds recommended by The American College of Obstetricians and Gynecologists (ACOG), these new findings are a helpful reminder why sticking to a healthy lifestyle while pregnant is so important.

In addition to eating healthy foods that will nourish both you and baby, make a plan to exercise regularly. Get started with these tips and exercises for pregnant and new moms.