Repetition is key, but so is something else.
ByAnisa Arsenault
Associate Editor
PublishedDec 2016 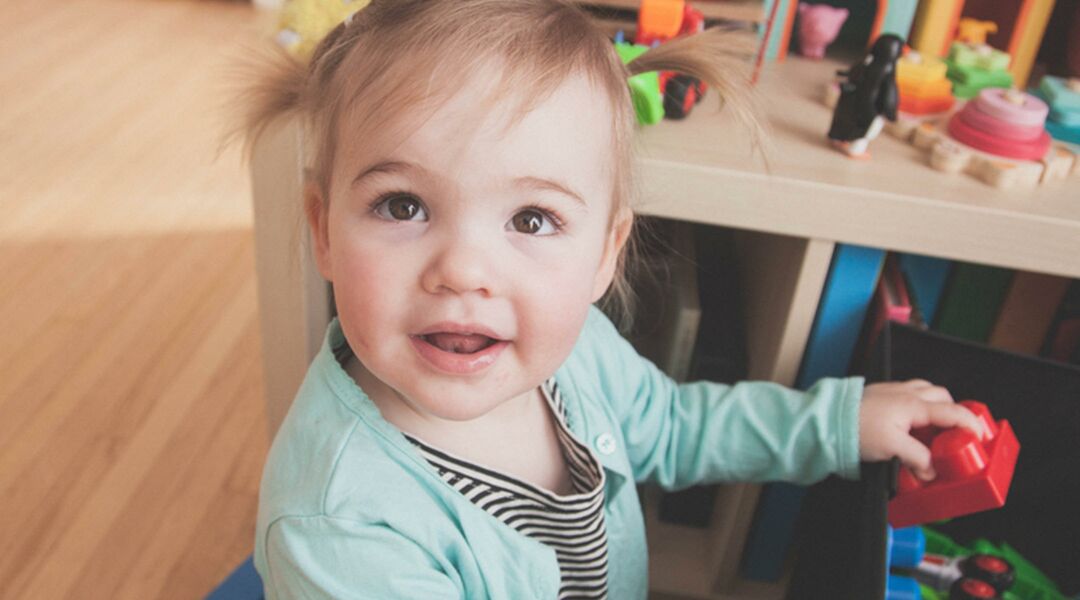 You can point to yourself and say ‘Mama’ all day long, but that doesn’t necessarily mean you’ll be baby’s first word. New research says the verbal experience of a toddler is largely influenced by his or her visual experience, and that the objects baby sees the most are likely to be his or her first words.

Sound obvious? It wasn’t quite what researchers were anticipating. The team from Indiana University and the Georgia Institute of Technology expected baby’s day-to-day visual experience to mimic that of mom or dad, since infants and toddlers typically go everywhere and do everything with a parent. Not the case. After equipping head cameras on eight 8- to 10-month-olds, researchers noticed that babies don’t always like to look at the same things mom and dad do, and in some cases, a lack of body control means they simply can’t.

Babies can and do, however, routinely look at their feeding tools. Researchers decided to analyze babies’ vision patterns at mealtimes, since many of the same objects (bottles, utensils) would be present in different settings (at a high chair, in a stroller).

The findings? As published in Royal Society Philosophical Transactions B, the top 15 of the babies’ first nouns were objects observed at mealtimes.

“We think that children’s first words are predictable based on their visual experience with objects and the prevalence of those objects in their visual world,” says study author Linda Smith. “Visual memory may be the initial key to getting words stuck on objects—familiar visual objects like table, shirt, bottle or spoon. It’s an aggregated experience; those very first words may be learned—slowly and incrementally—for a few visually pervasive objects. This may be how infants begin to break into language before their first birthday.”

Smith says there’s a lesson here: “Taking account of the visual brings a whole new dimension of word-learning into view,” she says. “If all you ever worry about is the word side of word-learning, you may be missing half the problem: visual cues that aid language learning.”

A better understanding of the importance of these visual cues may even help kids with delayed speech.

More Parents Are Reading From Birth Than Ever: Study