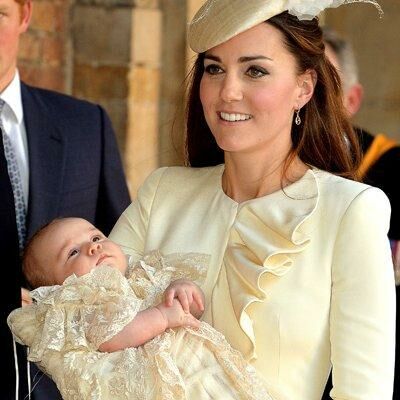 Hear ye, hear ye, a King hath been christened! Earlier this morning, the Duke and Duchess of Cambridge attended the much buzzed about christening for their royal baby boy, Prince George.

The three-month-old future heir to the British throne looked every ounce as sweet as we hoped he’d be and was held tight throughout the ceremony by his doting daddy, Prince William. Kate Middleton was decked out in a delicious design by Alexander McQueen and a matching Jane Taylor hat for the occasion. (I swoon for this woman all day, every day, folks.)

Love that both mama and baby match — and the use of these simple, neutral colors. I think it totally plays up the beauty of the occasion.

Both Prince Harry and Pippa Middleton shared a reading from two lessons for the service. And the Duke and Duchess handpicked the hymns. Fittingly, one of the anthems they picked for George was entitled “Bless Jesu! Here We Stand”, and it was written (and played) years before in honor of Prince William.

And now, for the juicy details! Just who was named as one of the seven godparents Prince George will have?

Zara Tindall: William’s cousin (and mama-to-be!) was named one of the seven royal godparents. She’s actually the only royal on the list. It’s been noted that Wills and Zara share a close bond and there’s no doubt that their babies, though months apart, will grow up together.

Oliver Baker : Never heard of him before? Allow us to explain: He’s a college friend of both Will and Kate.

Emilia Jardine-Paterson: Emilia attended college with Kate and is, apparently, a lifelong friend.

Earl “Hugh” Grosvenor:  Here’s where past meets present (again). The Earl is the son of one of William’s godparents. Fun fact? He’s only 22!

Jamie Lowther-Pinkerton:  Jamie is the private secretary to both William and Kate and has even worked for Prince Harry. At their 2011 nuptials, the couple honored Pinkerton by asking his son, Billy, to serve as page. The honor, it seems, continues.

Julia Samuel:  It’s the connection to Diana that we’ve all been holding our breath for. Julia was a close friend of William’s mother, and founder patron on the same charity as William, the Child Bereavement U.K.

William van Cutsem:  Talk about a name! William comes from the van Custem family, who’s most known for the support they offered William and Harry shortly after their mother’s passing in 1997.

Noticeably absent from the royal godparent list? You guessed it: Prince Harry , Pippa and James Middleton , Kate’s brother. It doesn’t seem insulting, however, that the royals have once again bucked with tradition to start their own modern ones. It seems as though all three already hold a special relationship to their nephew, so it seems only fitting that the godparent honor would be doled out to friends, family and loved ones that have helped shape William and Kate’s lives.

Did you feel like you had to choose a family member as godparent?